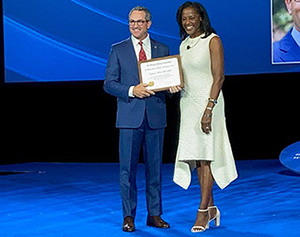 “Terry is a tremendous asset to mortgage industry and the CMB Society,” said Seth Sprague, CMB and 2021 Society Chairman. “He is a favorite instructor in the School of Mortgage Banking program and in addition to his dedication to teaching the next generation or mortgage professionals, Terry is active with the Colorado Mortgage Lenders Association. Terry also served as Chairman of the CMB Society for the 2017 cycle. I am thrilled to present this Award to Terry for his dedication to the Mortgage Industry for his past accomplishments and future efforts. Terry’s positive spirit, dedication to the CMB Society and on-going teaching efforts will continue to serve the industry well and he is most deserving of this recognition.”

Aikin started his residential mortgage finance career in 1998 as a loan officer in retail loan production after serving 10 years in commercial insurance. He then moved back into the insurance side of mortgage finance with United Guaranty, where he spent the next eight years. In 2008, he helped launch a technology-driven appraisal management firm, Solidifi, a Real Matters Company that went public in 2017.

After Solidifi, Aikin served as Senior Vice President of Lending Solutions at Mortgage Cadence and then President & CEO of Synergy Appraisal Services. In April 2017, he joined MGIC as a managing director covering the West Central Region.

Over the past 15 years, Aikin has been an active participant in MBA’s national advocacy efforts. He served as Chairman of the CMB Society from 2016-2017. He has been a valuable member of MBA’s School of Mortgage Banking instructor roster and a regular subject matter expert for content updates with several MBA Education courses. He received the Accredited Mortgage Professional (AMP) designation in 2006 and his CMB designation in 2008.

Outside of mortgage finance, Akin and his wife Michelle founded Fuel the Drive, a 501(c)(3) non-profit organization with the mission to support kids in sports, namely with a focus on golf and tennis.

The E. Michael Rosser MBA Education Lifetime Achievement Award is presented to an individual who has shown outstanding service to the Association, Certified Mortgage Bankers Society and the real estate finance industry.