‘Together Again’—and Not a Moment Too Soon 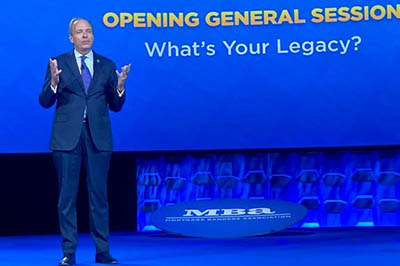 SAN DIEGO—For the first time in two years, the Mortgage Bankers Association is holding a live Annual Convention & Expo. And MBA President & CEO Bob Broeksmit, CMB, had a message for the nearly 3,500 in attendance.

“MBA is together again—and not a moment too soon!” Broeksmit said here at MBA Annual21 on Monday morning. “It’s been two long years since we last met. That’s why we chose the conference theme of ‘together again.’ It’s the perfect phrase.”

Broeksmit noted at the 2019 Annual Convention in Austin, Texas, “we had no clue what was headed our way. We had no idea a global pandemic was about to hit. None of us could have predicted it. Nor could we have foretold what happened next.”

At the outset, the worst-case scenarios suggested the U.S. was looking at another Great Recession. “It looked like the worst of times were on the way,” Broeksmit said. “We were wrong. In some ways, the past two years have been the best of times. We went from existential threats to our industry, to record volumes. We went from fearing an economic collapse to driving an economic recovery. And we did it by doing what we do best. In a time of terrible trial, your companies empowered the American people to pull through. When things were down, you helped millions of families trade up– to a new home, a better loan, and so much more. You were– and you still are– a source of real relief. While our country still isn’t out of the woods, it’s already clear: America is stronger, and the future is brighter, thanks to you.”

Broeksmit said the reason was simple: “A big part of the answer is that we stuck together, through it all,” he said. “We may not have been able to meet in person, but we still supported each other. It’s true on a personal level. I’ve never felt more camaraderie with the men and women [in this industry].”.

“Last summer, when the Federal Housing Finance Agency announced the Adverse Market Refinance Fee, you sent over 86,000 letters to Congress through the Alliance,” Broeksmit said. “Not only did FHFA delay the fee adoption to allow you to close loans already in your pipeline, the Biden administration quickly canceled it altogether. That’s what happens when we come together.”

Broeksmit reiterated his belief that MBA was made for times of crisis. “We’ve proven it; and we’ll keep proving it,” he said. “The worst of the crisis may have passed, but we still face a lot of challenges. We will overcome them, together, like we always do.”

Broeksmit said MBA continues to work closely with the new White House and Congress. “I’m often asked if the election results affect our ability to deliver for you; the answer is ‘no,’” he said. “Thanks to years of hard work, MBA is part of the conversation, whenever and wherever it happens. A lot of the people at the bargaining table may have changed, but we’re still there.  We’ve spent decades building bonds with leaders on both sides of the aisle. And we had a strong relationship with the Biden team before they took office. It’s only grown stronger since January.”

Nonetheless, Broeksmit acknowledged, “we have our work cut out for us. We’ve entered another era of less guidance and more enforcement. An aggressive regulatory posture is back. Well, my message to you and the entire industry is one of reassurance. MBA was made for this moment. We’ve got your back. And we’re in front of every fight.”

Take the Consumer Financial Protection Bureau, for example, which Broeksmit called one of MBA’s biggest focuses. “We were disappointed to see the Bureau delay the new QM Rule until October 2022,” he said. “The final regulation came from an open process that reflected our input and had the support of consumer advocates. It was a well-crafted rule, but the delay makes compliance more confusing and discourages innovative business models and the responsible expansion of credit.”

Broeksmit said MBA is re-activating the coalition that worked so hard on the new regulation. “Industry, consumer and civil rights groups supported the final rule,” he said. “The CFPB is going to hear from them again, and we hope it will listen. We have not come this far only to fall short.”

Another top and timely priority is infrastructure; Broeksmit noted the White House and Congress are still hammering out the details of a multi-trillion-dollar bill.

“The bill will include tax hikes; but we’re fighting to block the wrong tax hikes,” Broeksmit said. “We’re fighting efforts to raise taxes on mortgage servicing. We’re equally focused on preserving pass-through deductions which are critical to tax parity for our member firms…Whatever the policy, our message to the White House and Congress is simple. Don’t hurt our ability to help America recover. We’re in the middle of rebuilding the economy, and the mortgage industry is leading the way. It makes no sense to hurt your companies and the millions of families who count on you.”

Despite acrimonious inter- and intraparty negotiations, Broeksmit said the infrastructure bill will be finalized soon. “Our combined action is essential to making sure it reflects common sense,” he said. “Let’s make this bill as good as possible. And let’s protect our ability to serve the American people.”

Broeksmit said MBA is leading a complete rethink of how the industry tackles these issues. “We’re identifying new policies and products to boost minority homeownership,” he said. “And we’re changing our industry’s hiring practices to better represent the communities we serve. The past year has been a watershed. As Susan made clear, Convergence is a game-changer. We’re working with more stakeholders than ever. We’re combining our resources, know-how and resolve in exciting new ways. And we’re preparing for a nationwide expansion.”

Those changes extend to MBA as well. “For the first time, executives like me will be judged by whether we’ve made progress on minority homeownership,” Broeksmit said. “If we don’t achieve tangible results, I will personally be held accountable. It’s an unprecedented step, but a necessary one. It shows how committed we truly are.”

Additionally, the only new staff position created at MBA in 2020 was one focused solely on Diversity, Equity and Inclusion. “We’ve also set diversity standards for our boards and committees,” Broeksmit said.

“We’re calling it an action pledge for a reason,” Broeksmit said. “It’s one thing to talk about minority homeownership and hiring more women and minorities. It’s another thing entirely to take concrete steps. The sooner we transform our businesses and our talent pipeline, the better it will be for all of us, and for society itself. I know you’re committed to this cause. You’ve made that clear going back many years. Your leadership has inspired me and many others. Now the time has come to do even more. Diversity and minority homeownership cannot wait. They must happen now. And they need champions who will make them happen. We are those champions. Together, we will not only make history. We’ll make America more just, as well.”

Broeksmit said it was easy to lose sight of the bigger picture during the pandemic. “We were so busy, and so burned out at times, that we didn’t remember why we do what we do,” he said. “We should remember. Because you and your companies are something special. There’s no such thing as just originating a loan. There’s no such thing as merely servicing a mortgage. When you help a family refinance, you’re doing so much more than giving them a better interest rate. By the same token, when our members help businesses set up shop, or help families find their first apartment, they’re doing something extraordinary.

“Representing you fills me with pride. It strengthens my determination to fight for you and deliver for you. Since we last met, the MBA has done just that. We’ll accomplish more on your behalf in the coming year. But nothing we do matters as much as what you do, every day. And now that we’re together again, I want you to know: We’re excited to help you do even more good for even more people. You deserve nothing less, and at the MBA, we desire nothing more.”