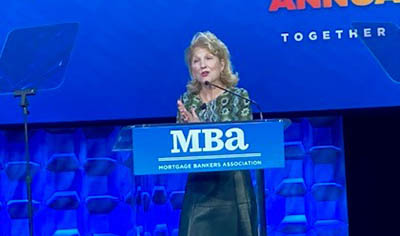 SAN DIEGO—Of the 106 men and women who have served as Chairman of the Mortgage Bankers Association, Susan Stewart’s term was likely the most unusual.

Stewart, CEO of SWBC Mortgage, San Antonio, Texas, took on the Chairman’s role as the first wave of the coronavirus pandemic reached its peak, sending the U.S. economy and the real estate finance industry into a temporary downspin. The pandemic forced MBA and the mortgage industry to pivot with a speed previously unimagined.

Add to the mix a tumultuous 2020 election season; a sudden boom in mortgage financing activity; and more Delta variant-related turbulence—what Stewart described here at the MBA Annual Convention & Expo as one of the most professionally and personally challenging year of her life.

“The pandemic…was the elephant in the room all 365 days I’ve held this job,” Stewart said. “Two years ago, I expected to spend my year as your Chairman flying around the country, giving speeches, and holding meetings with all of you. COVID-19 made that impossible. Instead, I spent most of the year in San Antonio, Texas.”

Stewart noted in many ways it remains “too early to have any perspective about 2020. Too little time has passed, but I am certain that in future years we will look back and marvel at what we accomplished. You truly did the hard work of pulling your companies, our industry, and our customers through one of the most difficult times in our history. And along the way you set the stage for a new era of growth and success.”

Stewart said the accomplishments of the past year, despite these obstacles, could not have occurred without the work of MBA members and staff.

Alchemy is only achieved when we are as one,” Stewart said. “Truly, when I look back at the past year, the most impressive thing I see is your advocacy and your partnership with the MBA every step of the way. You were the touchstone for us leading the way on every challenge we faced…and along the way, you set the stage for a new era of growth and success.”

When Stewart agreed to take on the Chairmanship, she, like others before her, expressed trepidation about the timing and the workload. “I think it was [2019 MBA Chairman] Brian Stoffers [CMB who told me, ‘There’s never a good time to be Chair,’” she said. “I had no idea how right he was. Brian is one of the smartest people I know, but I don’t think even he was prescient enough to predict a global pandemic for his term or mine.”

Stewart said while it was nice being home, she missed the in-person time. “We all adjusted to a virtual world, and I really want to commend the MBA Meetings team for pivoting so quickly and so beautifully to a virtual environment,” she said. “That said, the virtual world has nothing on being here with all of you. No comparison. I can honestly say I have never been happier to be in a room filled with mortgage bankers.”

Stewart praised MBA members for their work over the past 18 months. “You powered America through the pandemic,” she said. “At a time when families were struggling and anxious, you came through with relief. You helped Americans of all backgrounds find new homes, new apartments and better loans for their current homes. Our commercial members helped countless companies pull through. When millions of people were at risk of sinking, you kept your communities afloat. Quite simply, your companies are heroes of the pandemic.”

“I believed then, and I do today, that working together we have the ability to make meaningful change,” Stewart said. “Let’s lift up some people, some neighborhoods and entire communities that have waited on the sidelines for generations. Thanks to all of you we put out the call and you showed up. You’ve done a lot to improve minority homeownership over the years, but you’ve never done more than you did this past year.”

When MBA launched the CONVERGENCE initiative in Memphis, it set a goal of bringing together industry leaders and stakeholders from across the community. CONVERGENCE’s success in Memphis enabled it to start a pilot program in a second city, Columbus, Ohio, this past July. MBA’s Affordable Homeownership Advisory Councils also created the Minority Homeownership Taskforce, which in September launched an initiative, Building Generational Wealth Through Homeownership.

“It represents the biggest public commitment we’ve ever made to help the millions of people who have been historically and systemically shut out of homeownership,” Stewart said. “It’s the perfect plan at the perfect time– because this is an issue the White House and Congress care about deeply.”

Stewart said she is “not surprised” by MBA’s commitment and resilience. “MBA members always shine, in good times and bad,” she said. “But being MBA chair gave me a whole new perspective about the power this organization wields and incredible talent of our MBA team.”