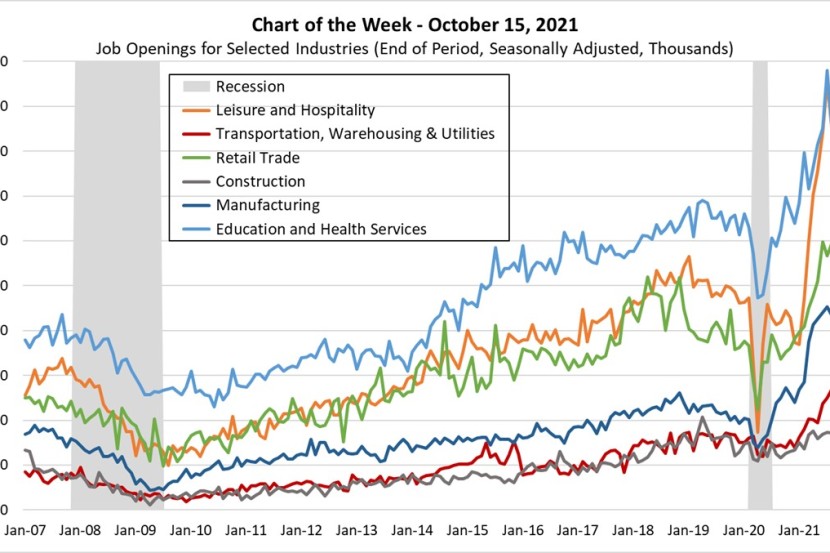 The Bureau of Labor Statistics’ Job Openings and Labor Turnover Survey (JOLTS) data for August continues to show that many employers are running into difficulty re-hiring and filling open positions.

While retreating from (a series high of) over 11 million in July 2021, openings remained over 10.4 million in August (the second highest data point on record). Moreover, the August JOLTS showed that the number of workers quitting their jobs voluntarily continued to soar from a pandemic low of 2.1 million in April 2020 to 4.3 million—a new series high.

Despite improving unemployment rates (5.2% in August and 4.8% in September), JOLTS data indicates that labor supply remains constrained, with one-and-a-quarter openings in July and August for each unemployed individual—this as retailers and other sectors look to ramp up employment as the holiday season looms.

In this week’s MBA Chart of the Week, we examine the JOLTS monthly data series on job openings for selected industries. For example, there were, on average, fewer than one million openings in leisure and hospitality in 2019 (orange line). This fell to 345,000 at the end of April 2020 but was over 1.7 million in August 2021. Similarly, retail trade openings (green line) are up almost 50% from where they were in the corresponding period in 2019, and recent sharp increases in manufacturing and service industries (as exemplified by education and health services in the chart) means that openings in these industries are also at or close to series highs. The only series shown in the chart that was not at a new high in the last few months is construction (gray line). However, openings remained relatively high in August at 344,000.

Many employers hope that the September JOLTS will paint a better picture for them as the Delta variant ebbs, supplemental unemployment programs end, and kids are back in school. For workers, the strong labor demand has contributed to average hourly earnings for all employees on private nonfarm payrolls to increase from $29.50 in September 2020 to $30.85 in September 2021 – a 4.6% increase. However, as described in Wednesday’s Consumer Price Index release, since consumer prices rose 5.4% over the past twelve months, employers might have to further increase wages to fill their open positions.