MBA: October New Home Applications Up 6% From September, Down 15.2% from Year Ago 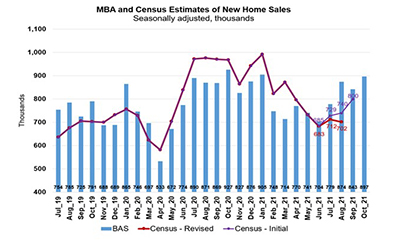 The Mortgage Bankers Association’s Builder Application Survey data for October show mortgage applications for new home purchases increased by 6 percent from September, but decreased by 15.2 percent from a year ago.

“The strong monthly gain puts MBA’s estimate of new home sales at its strongest pace since January,” said Joel Kan, MBA Associate Vice President of Economic and Industry Forecasting. “Purchase activity continues to be dominated by higher loan balance transactions, which pushed the average new home loan size up to over $412,000, another new record in the survey. Recent U.S. Census data show an increasing share of new sales are for homes yet to be built or still under construction, and a shrinking share of completed homes. Housing demand remains strong, and buyers are making quick decisions in a still very competitive market.”