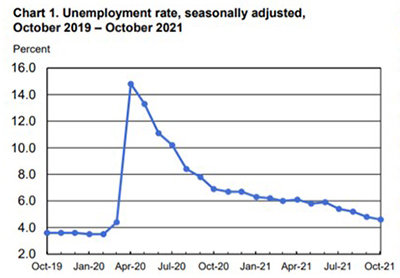 Payroll employment roared back in October after tepid growth the previous two months as the U.S. began to move on from the fading coronavirus Delta variant, the Bureau of Labor Statistics reported Friday.

The report said total nonfarm payroll employment rose by 531,000 in October, while the unemployment rate edged down by 0.2 percentage point to 4.6 percent. BLS reported widespread job growth, with notable gains in leisure and hospitality, in professional and business services, in manufacturing and in transportation and warehousing.

The unemployment rate and the number of unemployed persons, at 7.4 million, continued to trend down. Both measures are down considerably from their highs at the end of the February-April 2020 recession. However, they remain above their levels prior to the coronavirus (COVID-19) pandemic (3.5 percent and 5.7 million, respectively, in February 2020).

“The number of unemployed individuals has now dropped by 3.6 million since October 2020, with both the short-term and long-term unemployment rates falling this past month,” said Mike Fratantoni, Chief Economist with the Mortgage Bankers Association. “With employers struggling to fill millions of open positions, wages are rising, with average hourly earnings up almost 5% compared to last year. Strong wage growth should be effective in continuing to bring individuals who had stopped looking for work back into the labor force, but the participation rate remains below pre-pandemic levels.”

Fratantoni said the pandemic’s impact on the economy is waning. “Only 11.6% of workers teleworked in October due to the pandemic, a drop from 13.2% in September. This is positive news for the office market,” he said. “Construction employment increased by 44,000, led by growth in contractor employment. The housing market is still woefully short of inventory, so growth in this sector is also good news.”

“As it stands now, approximately 19% of the jobs lost in the pandemic have not been regained,” said Odeta Kushi, Deputy Chief Economist with First American Financial Corp., Santa Ana, Calif. “If monthly gains continue at the October pace, we could return to the pre-COVID employment peak by June 2022.”

Sarah House, Senior Economist with Wells Fargo Economics, Charlotte, N.C., said October’s increase in employment hinted that many of the recent headwinds to hiring, such as the Delta variant, parts shortages and the availability of labor itself, are beginning to ease.

“Employers continue to raise pay at strong rate in order to attract and retain workers, but the increases appear to be pulling workers back into the jobs market,” House said. “Despite the overall participation rate remaining unchanged, the total size of the labor force inched up, with a notable increase in prime age workers and those under the age of 25. We expect hiring to remain robust over the coming months, as workers’ constraints ease and financial needs rise.”

House said job growth could still be held back by labor availability in the coming months, but workers should continue to trickle back into the hiring pool. “More discernable improvement should come next spring,” she said.