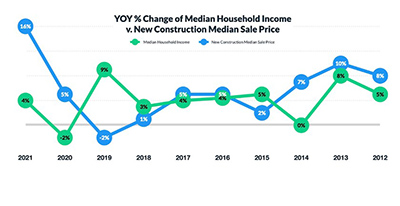 The uptick in new construction has been viewed as a positive sign for buyers looking for options in an inventory-starved U.S. housing market. However, a new analysis by Knock, New York, a digital homeownership platform, reported most American households are being priced out of the new home market even as builders shift their focus to smaller homes to accommodate the entry-level market.

Knock compared the median household income and the median new home sales price in the nation’s largest metropolitan areas with the most active new home markets to determine just how much relief new construction will provide as buyers, especially first-time homebuyers, are grappling with affordability in a highly competitive housing market. The analysis showed wages have not kept up with home price growth, keeping new construction out of reach for many.

For example, the report said, to qualify for a mortgage on a $390,900 home, the median price of a new home sold in the U.S. in August, a buyer making a 6% down payment, the national average, would need an annual household income of just under $80,000. This means nearly 60% of Americans would not be eligible, based on the 2020 national median household income of $67,521.

“Years of building undersupply and the current supply shortages are disproportionately impacting lower income homebuyers looking for alternatives in a housing market where homes are garnering multiple offers and selling for over asking price,” said Knock Co-Founder and CEO Sean Black. “Although more new homes are expected to come onto the market in 2022, wages have not kept up with home price growth, keeping new construction out of reach for many, especially first-time buyers who don’t have the benefit of equity from a home sale.”

Of the 50 largest metros in which new homes accounted for at least 8% of total home sales, Miami, Sacramento, Calif., and Las Vegas rank as the least affordable new construction markets. Based on household income, 80% of buyers in Miami and Sacramento would not qualify for a mortgage on a median-priced new home and 65% of buyers in Las Vegas are unable to afford a new home. It would take these buyers anywhere from 18 to 30 years to save for a 6% down payment.

With some of the highest percentage of new home sales among the major metros, San Antonio, Oklahoma City, Raleigh, N.C., Minneapolis and Atlanta rank as the most accessible markets for new construction. In each of these markets, 50% of households would not qualify for a mortgage on a median-priced new home based on their income. On average, it would take 15 years to save for a 6% down payment on a median-priced new home.

The report said in markets with the most new homes for sale, the premium for new construction to existing homes on average is $68,454. However, this gap increases significantly in several markets, including Miami, where the median price for a new home is $720,000, $310,000 more than a median-priced existing home.

“If new construction homes do not align with the buying power of the average consumer, benefits of these added units are felt disproportionately throughout the country and are attenuating a much smaller portion of the building gap issue than previously thought,” said Alexandria Quintana, Knock Research Analyst and the report’s author.