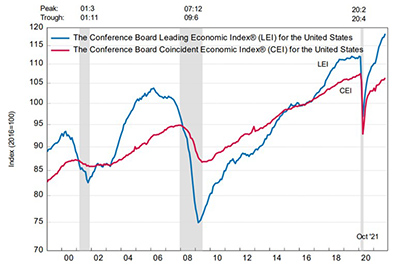 “The U.S. LEI rose sharply in October, suggesting the current economic expansion will continue into 2022 and may even gain some momentum in the final months of this year,” said Ataman Ozyildirim, Senior Director of Economic Research with The Conference Board. “Gains were widespread among the leading indicators, with only the average workweek and consumers’ outlook making negative contributions.”

Ozyildirim cautioned, however, that rising prices and supply chain bottlenecks pose challenges to growth and are not expected to dissipate until well into 2022. “Despite these headwinds, [we expect] growth to remain strong in the fourth quarter at around 5.0 percent (annualized rate), before moderating to a still historically robust rate of 2.6 percent in Q1 2022,” he said.

“The [October] gain can primarily be traced to a hefty 0.62 percentage point contribution from initial jobless claims, which declined for the seventh straight week in a separate release this morning,” said Tim Quinlan, Senior Economist with Wells Fargo Economics, Charlotte, N.C. “Other line items pointed to the manufacturing sector still facing an uphill battle against supply chain issues and dwindling consumer optimism as inflation weighs on consumers’ minds and wallets.”