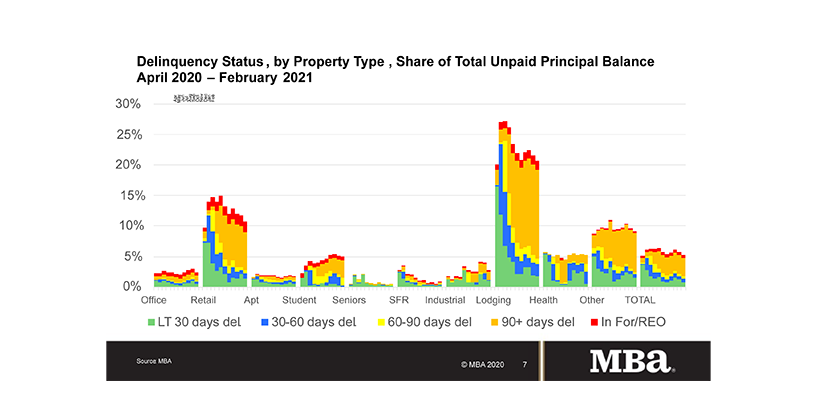 The CREF Loan Performance Survey was developed to better understand the ways the pandemic is impacting commercial mortgage loan performance. MBA’s regular quarterly analysis of commercial/multifamily delinquency rates is based on third-party numbers covering each of the major capital sources.

“After slight deterioration at the end of 2020, commercial and multifamily mortgage performance improved for the second straight month in February, bringing delinquency rates down to the lowest level since April 2020,” said MBA Vice President of Commercial Real Estate Research Jamie Woodwell. “Lodging and retail property loans continue to show the greatest stress, but the shares of outstanding loan balances that are delinquent have fallen from their peak levels by 25 percent and 28 percent, respectively.”

Woodwell noted across all property types, the share of outstanding balances becoming newly delinquent is also the lowest since the onset of the pandemic, and less than one-quarter the level from April 2020.

The balance of commercial and multifamily mortgages that are not current decreased in February to its lowest level since April 2020.

Loans backed by lodging and retail properties continue to see the greatest stress. The overall share of lodging, retail, industrial and office loan balances that are delinquent decreased in February.

Because of the concentration of hotel and retail loans, CMBS loan delinquency rates are higher than other capital sources.

To view the report, click here. Differences between the delinquency measures are detailed in Appendix A.