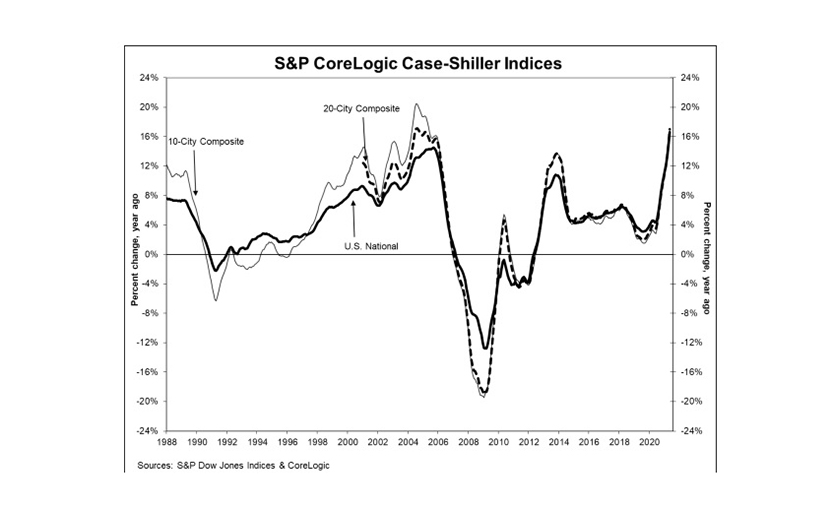 “A month ago, I described April’s performance as ‘truly extraordinary,’ and this month I find myself running out of superlatives,” said Craig Lazzara, Managing Director and Global Head of Index Investment Strategy at S&P DJI. He noted the 16.6% gain represented the highest reading in more than 30 years of S&P CoreLogic Case-Shiller data.

“As was the case last month, five cities–Charlotte, Cleveland, Dallas, Denver and Seattle–joined the National Composite in recording their all-time highest 12-month gains,” Lazzara said. He noted price gains in all 20 cities surveyed were in the top quartile of historical performance and price gains were in top decile in 17 of the 20 cities.

Selma Hepp, Deputy Chief Economist with CoreLogic, Irvine, Calif., said underlying strength in consumer demand remains supported by a significant pool of accumulated savings and solid mortgage underwriting. “Both are markedly different than the home price run-up seen in 2005,” she said. “Nevertheless, improvements in availability of new listings will help release the tremendous pressure that competing buyers have put on home prices and home price growth, which is likely to slow by the end of the summer.” On a more granular level, Hepp said the middle and high tiers increased up 18.1% and 17.5%, respectively, “also hitting the series high.” And the month-to-month index shot up 2.14%, making it the fastest April-to-May increase since the data series began, she said.