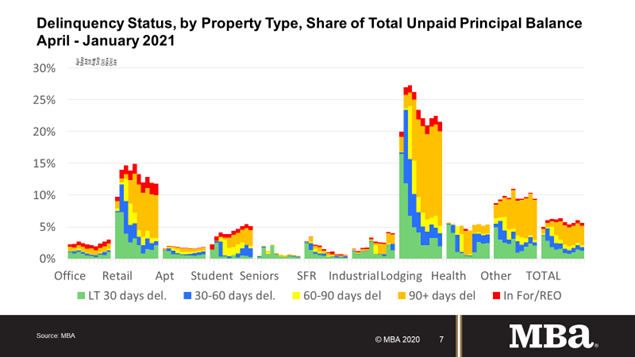 “The stress in commercial mortgages continues to be concentrated among the property types that have been most directly and immediately impacted by the pandemic, most notably lodging and retail properties,” said Jamie Woodwell, MBA Vice President of Commercial Real Estate Research. “Among some other property types, including office and multifamily, overall delinquency rates remain lower, but have climbed slightly in recent months. While MBA is forecasting for a strong economic rebound in the second half of this year, as a rapid roll-out of vaccines and continued government fiscal assistance to households and businesses provide support for the market, there still remains a heightened sense of uncertainty about the months ahead.”

The survey was developed to better understand the ways the COVID-19 pandemic is impacting commercial mortgage loan performance.

The balance of commercial and multifamily mortgages that are not current decreased in January, driven by fewer loans becoming newly delinquent.

Loans backed by lodging and retail properties continue to see the greatest stress, but there were slight improvements in January. The overall share of retail, industrial and lodging loan balances that are delinquent decreased.

Because of the concentration of hotel and retail loans, CMBS loan delinquency rates are higher than other capital sources.