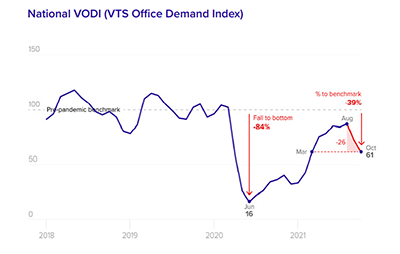 VTS, New York, reported new demand for office space fell for the second consecutive month in October to a level last seen in the first quarter.

The VTS Office Demand Index noted an initial wave of post-vaccine new office demand that peaked in August at 87 percent of the pre-pandemic average. “That has since subsided, suggesting that the initial wave of pent-up demand from the pandemic has already materialized,” the report said.

The index fell 26 points over the last two months to a 61 score nationally. “This is the first time since the beginning of the pandemic that the VODI has fallen two or more consecutive months—the last time the VODI was this low was in March,” VTS said. But it noted new office demand remains nearly 70 percent above its level from one year ago.

“However, the decline of new office demand does not necessarily indicate that active demand–employers shopping for space right now–is down,” VTS said. “Rather, prospective tenants who introduced new demand in recent months are likely to still be actively seeking space. It is the flow of new tenant requirements that has subsided, and that suggests that the initial wave of new office demand post-vaccine may be spent.”