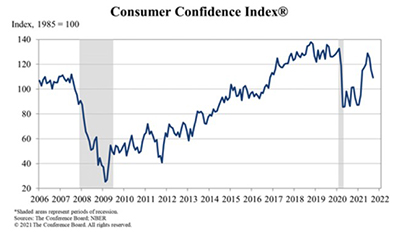 Consumer confidence took another hit in September, The Conference Board reported Tuesday, as the lingering Delta variant and concerns over the economy interrupted momentum sent the index to a seven-month low.

“Consumer confidence dropped in September as the spread of the Delta variant continued to dampen optimism,” said Lynn Franco, Senior Director of Economic Indicators with The Conference Board. “Concerns about the state of the economy and short-term growth prospects deepened, while spending intentions for homes, autos, and major appliances all retreated again. Short-term inflation concerns eased somewhat, but remain elevated. Consumer confidence is still high by historical levels—enough to support further growth in the near-term—but the Index has now fallen 19.6 points from the recent peak of 128.9 reached in June. These back-to-back declines suggest consumers have grown more cautious and are likely to curtail spending going forward.”

“With no shortage of other factors to blame, such as wildfires, war, hurricanes and a border crisis, we see room for improvement in coming months,” said Tim Quinlan, Senior Economist with Wells Fargo Economics, Charlotte, N.C. “A strong labor market might be the only thing giving consumers much cheer these days amid an onslaught of negative news.”

“While consumers know there are a lot of opportunities out there currently, they are more concerned about what employment will look like in a few months,” Quinlan said. “This may also just be the consequence of coming off of a hot labor market and the expectation that things can only be so good for so long. Next week’s employment report should be able to shed more light on the state of the labor market and whether August was a blip, as we suspect, or the start of a weaker trend.”