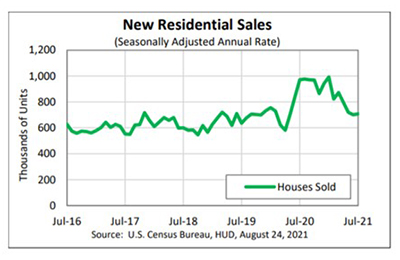 “Home buying activity has cooled off in recent months alongside soaring prices and shrinking inventories; however, July’s report is evidence that underlying demand for homes remains strong,” said Mark Vitner, Senior Economist with Wells Fargo Economics, Charlotte, N.C. “Low inventories and the rapid run-up in prices have led prospective buyers to put their home-buying plans on hold, which explains a softer pace of sales in recent months. The pullback also makes sense considering supply chain disruptions have led to new project delays and many new home communities are sold out, leaving buyers with relatively little to choose from.”

Vitner noted, however, the recent uptick in inventories “must be taken with a grain of salt,” saying while the number of homes for sale rose at every stage of construction, “most of the recent improvement in inventories has been for homes that have not yet started construction. Overall, inventories remain tight, which continues to put upward pressure on prices.”

Odeta Kushi, Deputy Chief Economist with First American Financial Corp., Santa Ana, Calif., agreed. “Remember, builders are dealing with rising costs of materials, delays and shortages of lots and labor,” she said. “The outlook for new home sales is largely dependent on the amount of new homes being built and demand for new homes. The current pace of building is limited by multiple supply-side headwinds, but the July increase in the number of permits issued is a positive sign of more building to come.”

“After trending downward for much of the past year, new home sales appear to have leveled out over the past three months,” said Mark Palim, Deputy Chief Economist with Fannie Mae, Washington, D.C. “With continued strong price appreciation in the existing home market, low mortgage rates and a limited inventory of existing homes for sale, demand for new homes should remain strong.”

Palim said sales should move upward as the year continues, as sufficient demand is present, “but the pace at which acceleration occurs will likely be determined by the speed at which homebuilders can clear their current backlogs and overcome material availability and other supply constraints.”