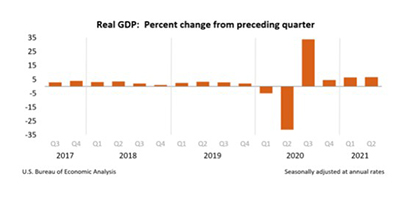 Real gross domestic product continued its hot pace in the second quarter, according to the second (revised) estimate released Thursday by the Bureau of Economic Analysis.

The second estimate topped last month’s advance estimate of 6.5 percent. In the first quarter, real GDP increased 6.3 percent. The update reflects upward revisions to nonresidential fixed investment and exports that were partly offset by downward revisions to private inventory investment, residential fixed investment and state and local government spending. Imports, which are a subtraction in the calculation of GDP, were revised down.

BEA said the increase in second quarter GDP reflected the continued economic recovery, reopening of establishments and continued government response related to the COVID-19 pandemic. In the second quarter, government assistance payments in the form of loans to businesses and grants to state and local governments increased, while social benefits to households, such as the direct economic impact payments, declined. The increase in real GDP in the second quarter reflected increases in personal consumption expenditures, nonresidential fixed investment, exports and state and local government spending that were partly offset by decreases in private inventory investment, residential fixed investment, and federal government spending. Imports, which are a subtraction in the calculation of GDP, increased.

The report said the increase in PCE reflected increases in services (led by food services and accommodations) and goods (led by “other” nondurable goods, notably pharmaceutical products, as well as clothing and footwear). The increase in nonresidential fixed investment reflected increases in intellectual property products (led by research and development as well as software) and equipment (led by transportation equipment). The increase in exports reflected an increase in goods (led by nonautomotive capital goods) and services (led by travel). The decrease in private inventory investment was led by a decrease in retail trade inventories. The decrease in federal government spending primarily reflected a decrease in nondefense spending on intermediate goods and services. In the second quarter, nondefense services decreased as the processing and administration of Paycheck Protection Program (PPP) loan applications by banks on behalf of the federal government declined.

Current dollar GDP increased by 13.2 percent at an annual rate, or $693.2 billion, in the second quarter to a level of $22.73 trillion. In the first quarter, GDP increased 10.9 percent, or $560.6 billion (tables 1 and 3). More information on the source data that underlie the estimates is available in the Key Source Data and Assumptions file on BEA’s website.

The report also said profits from current production (corporate profits with inventory valuation and capital consumption adjustments) increased by $234.5 billion in the second quarter, compared with an increase of $123.9 billion in the first quarter.

“The surge in profits reflects the solid pace of consumer and business demand during the quarter, as profit growth was broad based, with both domestic and foreign profits advancing,” Bryson said.  “Profits were up a whopping 43.4% on a year-ago basis, partially flattered by low base comparisons in the second quarter of last year when lockdowns were in full swing.”