Climate Change? For Many Homebuyers, ‘Who Cares?’ 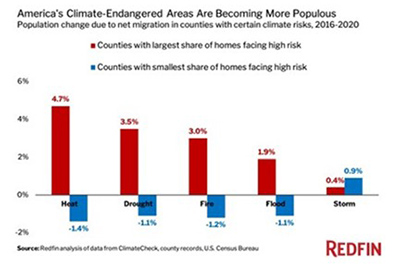 The real estate industry is long-known for stories and anecdotes that seemingly defy logic—take, for example, the burnt-out home in San Francisco that last week drew a bidding war that pushed the final price above $1 million. Now, two separate reports show despite dire warnings about climate change, properties in some of the most vulnerable spots in the nation are actually attracting more interest—and higher prices.

In a separate report, ATTOM, Irvine, Calif., said despite dire warnings about oceanfront real estate—including the recent tragedy in Florida in which an eight-story condo building collapsed—condo prices rose by at least 20 percent in a majority of oceanfront counties around the U.S.

The Redfin analysis of data from climate-data startup ClimateCheck, county property records and the U.S. Census Bureau found the 50 U.S. counties with the largest share of homes facing high heat risk saw their populations increase by an average of 4.7% from 2016 through 2020 due to positive net migration. Meanwhile, the 50 counties with the largest percentage of homes facing high drought, fire, flood and storm risk experienced average population growth of 3.5%, 3%, 1.9% and 0.4%, respectively, due to positive net migration.

“People have been gravitating to places with severe climate risk because many of these areas are relatively affordable, have lower property taxes, more housing options or access to nature,” said Redfin Economist Sebastian Sandoval-Olascoaga. “For a lot of people, these benefits seem to outweigh the dangers of climate change. But as natural disasters become more frequent, homeowners in these areas may end up losing property value or face considerable difficulty getting their properties insured against environmental disasters.”

Further defying logic, the report said places with relatively low climate risk have experienced the opposite trend: population decline. The 50 counties with the lowest share of homes facing high heat risk saw their populations decrease by an average of 1.4% from 2016 through 2020 due to negative net migration. Meanwhile, the 50 counties with the smallest percentage of homes facing high drought, fire and flood risk experienced average migration-driven population declines of 1.1%, 1.2% and 1.1%, respectively.

The report can be accessed at https://www.redfin.com/news/climate-migration-real-estate-2021/.

Meanwhile, ATTOM reported median condo prices in 50 percent of U.S. oceanfront counties surpassed the typical $305,000 condo price nationwide, while 50 percent fell below. It also showed median condominium prices increased during the second quarter by at least 20 percent, measured year over year, in slightly more than half of the oceanfront counties analyzed. Less-expensive oceanfront condo markets, concentrated in the South, generally showed bigger year-over-year gains, while the most expensive counties, located mainly in the West, showed the smallest.

The report looked at 86 counties around U.S. that bordered the Atlantic Ocean, Pacific Ocean or the Gulf of Mexico. It noted condo price gains in oceanfront counties came at a time when the national housing market boom was roaring into its 10th year, with median single-family home and condo prices rising annually by more than 15 percent across a majority of the U.S. Condo values have continued to rise in oceanfront areas amid a combination of historically low mortgage rates and the ongoing appeal of living along or near oceanside communities.

Todd Teta, chief product officer with ATTOM, said while the coronavirus pandemic that hit last year remains a threat to the economy and the housing market, there are especially vulnerable areas, including the South, where fewer people are vaccinated and the latest virus variant has led to a new surge of cases. But second-quarter home sales data shows that oceanfront condo markets continue to ride the decade-long national housing market boom.

“Condos in oceanfront areas appear to be right in the middle of the pack when it comes to the ongoing market boom,” Teta said. “Broadly speaking, they are worth close to what condos around the nation are worth and are gaining value at around the same pace as all homes in the U.S.”