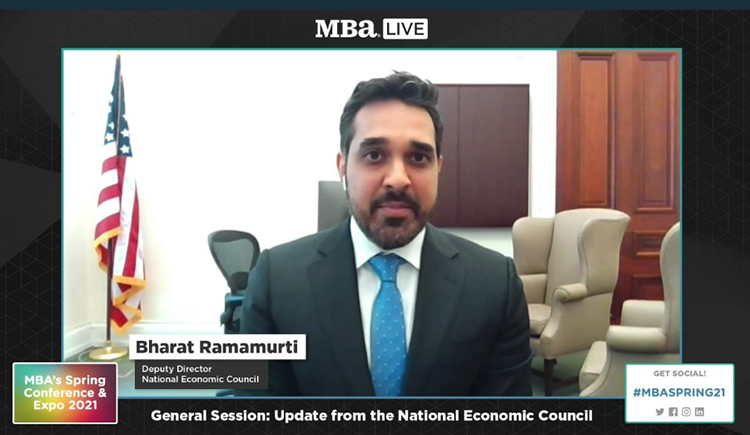 During the final months of the Trump Administration, the Federal Housing Finance Agency implemented product caps on Fannie Mae and Freddie Mac through their Senior Preferred Stock Purchase Agreements—a move that the Mortgage Bankers Association called “disruptive” for many of its members.

“Implementation of these product caps – particularly for second homes and investor properties – significantly impacts existing lender pipelines and is creating major disruptions in the market,” MBA said. “MBA believes the caps were intended to apply to the aggregate purchase volumes at each GSE, and not extended to the individual lender level. Lender-level implementation has created significant seasonal and geographic dislocations for certain markets.”

“It’s time-sensitive, given that May deliveries are affected and wreaks just massive runups on the price and add-ons for second homes and investment properties in response to this policy,” Broeksmit noted.

In response, Ramamurti said while the Biden Administration has not yet developed a new position or a course of action yet on either the GSE conservatorship or the recent amendments to the PSPAs, it does recognize the disruption to the marketplace.

“We’re looking forward to working across the Administration with Congress to grapple with those issues,” Ramamurti said. “And we recognize that the issues you raised with second homes is a shorter-term issue, and all I can say on that is we are aware of it; we will continue to engage on it; and we are happy to work with you and your members on it going forward, and having a conversation with FHFA about it…we appreciate you flagging it for us and we recognize that.”

Ramamurti also thanked MBA for its support of the American Rescue Plan recently passed by Congress, which includes $10 billion in homeowner assistance. Ramamurti said the law should spur a stronger economic recovery.

“Generally speaking, we’re on a good trajectory here,” Ramamurti said. “But there’s a lot of work to do and a lot of variables to keep in mind. We’re still about eight to nine million jobs short of where we were, pre-pandemic, so that’s a significant hole. Obviously with passage of the American Rescue Plan, independent analysis shows we are likely on track to recover all of those jobs by some time next year, which is a good trend.”

Ramamurti cautioned about other factors, including the persistence of the COVID-19 virus. “We have to continue vaccinating at or near the pace we have been over the past several weeks; we need to keep an eye on what’s happening internationally, and new variants that are developing,” he said. “And there continue to be economic risks that we need to monitor. We have to make sure that all of the great element of the American Rescue Plan and all the relief that it offers actually gets into the hands of the people. More than 100 million checks have already been delivered to the folks who are eligible for it, but there are other programs, like you said, for example, the homeowner assistance program, where the money hasn’t gone out the door yet. We have to make sure that the money is delivered and gets into the hands of the people who need it most.”

The past year, Ramamurti said has seen a “K”-shaped economy in which those with lower incomes were harder hit. That’s where most of the relief in the American Rescue Plan has been targeted and we need to make sure that bottom length of the “k” manages to get a speedy recovery. And our goal overall is to make sure we get to full employment as quickly as we possibly can.”

The housing market faces challenges as well, Ramamurti said. “We have seen a significant rise in prices over the past year or so; we are, by one estimate that I saw, about four million homes short of satisfying the level of demand that we have right now, which is why you’re seeing this run-up in prices,” he said. “We are seeing a rise in the cost of lumber and other inputs that we need—including labor, quite frankly—to build new homes. We are closely monitoring what’s happening in the housing market. Part of the reason why we are proposing in the American Jobs Plan a significant investment in housing supply to address some of the significant shortages in the housing market.”

Ramamurti said the American Jobs Plan—the massive, $2 trillion infrastructure package proposed by the Biden Administration—addresses housing issues. There’s a hole in the market right now, where for private developers it is less profitable or not profitable at all to build new starter homes targeted at folks with middle or lower incomes,” he said. “The same issues apply for the rental market. What we are proposing in the jobs plan is a two-pronged approach; Number one, additional federal programs intended to make it profitable for folks to build that kind of housing—a combination of investments in low-income housing tax credits, the Neighborhood Homes Program, which I know that the MBA is supportive of, and investments in programs such as the Home Program Trust Fund, which provides certain incentives to developers, all of which is projected to help develop and preserve more than one million new homes over the next several years.”

Ramamurti said the Administration is pairing that with a new approach to address highly restrictive, exclusionary zoning requirements in states and cities. “These are requirements like minimum lot size, bans on multifamily housing, parking requirements; things that are driving up the cost of  new home production and frankly locking many homebuyers out of the possibility of having better job opportunities, better schooling for their kids,” he said. “Our belief is that if we’re going to put a lot of federal dollars out there to build supply, we’re going to ensure that there are as many communities out there where that new supply can be built.”

Ramamurti said the Administration is offering is a “carrot” in the form of a $5 billion pot of money for competitive grant programs. “So, if you’re a city, and you’re interested in making changes to pare back some of these highly restrictive laws you have on the books, you can get access to these federal funds, which will allow you to expand roads, build new parks, build new schools, and make a case to your residents that ‘hey, look—by taking down some of these barriers to new homes in our neighborhood, we can also build a new school; we can expand the park downtown, we can open up the road that goes downtown and it’s going to be a net win for our residents,’” he said.

Ramamurti said he was grateful that MBA and its members are working to support minority homeownership. “here are massive disparities in wealth between the typical Black/Hispanic families and the typical White family,” he said. “It makes it harder for minority families to get the money together for a down payment to buy a home. And the flip side to that is owing a home is one of the key ways to build wealth. So, buy being unable to make that down payment and getting into a house, it prevents them from building wealth over time and that only further exacerbates the wealth gap.”

The Biden Administration, Ramamurti said, is developing a holistic approach in which “every single policy area, every single action we take, is through a lens of how we are addressing this wealth gap. Are we making progress toward closing it? Because as the President has said, this is about maximizing the potential of the economy overall. It’s not just about individual fairness. There are a wide variety of solutions to addressing these problems, and housing is essential to the solution. It is the primary way in which people build wealth in this country; it is a key intergenerational issue in which the first generation is able to buy a home, pay it off, and then they pass along that home, fully paid, to the next generation and that starts them on a good foundation. We have to make that a reality for more folks.”