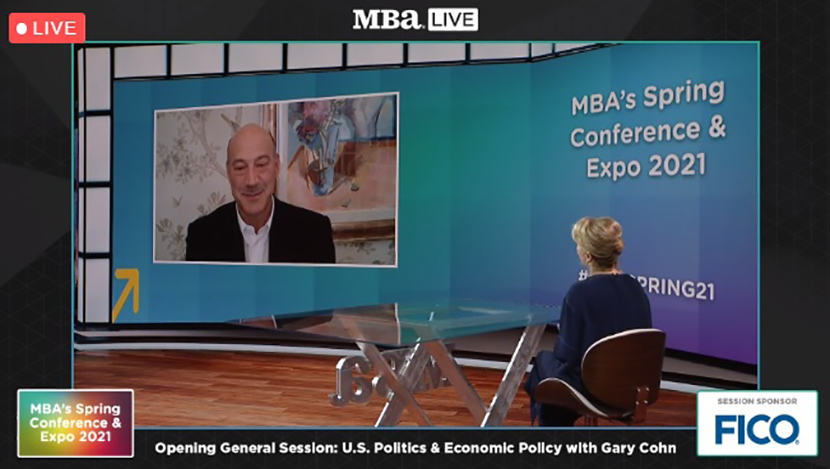 The economy is well-positioned for growth as it leaves the Pandemic Recession, said former National Economic Council Director and Vice Chairman of IBM Gary Cohn during the recent MBA Spring Conference & Expo 21.

“We are coming out of one of the most unique periods–hopefully–in all of our lives,” Cohn said, crediting the federal stimulus actions with averting disaster during the downturn. “If you look where the average U.S. consumer is today, they are probably in one of the best positions they’ve been in in a very long time,” he said. “So as we start this economic recovery, we start with consumers in a very good condition. We’re pretty confident the job market will recover.”

But Cohn noted one big variable in the recovery process–the travel, leisure, hospitality and entertainment sector. “If that comes back as we all hope it does, we will see the job creation picture change fairly rapidly in the U.S. and we all think that it’s fairly robust.”

Just one year ago everyone was worried about the U.S. economy, but now many economists thinking the country could see 7 to 8 percent growth in the next year, Cohn said.

Cohn, who was President and COO of The Goldman Sachs Group from 2006-2016 before joining the White House, called the present moment a unique period. “Normally when you go through these economic cycles where you see more explosive growth, you would tend to see inflation creeping into the economy,” he said. “I think we’re starting to see signs of that already. But we also have the Federal Reserve, which is highly committed to keeping rates low and being very accommodative. Obviously, mortgage bankers know as well as anyone that interest rates drive the mortgage market and they drive purchasing power for homes.”

Cohn said there are two ways inflation is created. “The first is through increasing wages and the second is through input costs or commodity prices,” he said. “We’re now starting to see commodity prices creep up. So the only issue I have going forward on interest rates is how long can the Federal Reserve keep with this accommodative policy if we start seeing inflation, because the natural tool the Fed uses to fight inflation is higher interest rates.”

But Cohn forecast “a very favorable interest rate environment for the next year or so” as the Fed remains highly involved in the market.

Cohn said nothing else he has ever done could replace his government service. “If anyone viewing this is ever asked to serve in government, the answer should be yes,” he said.