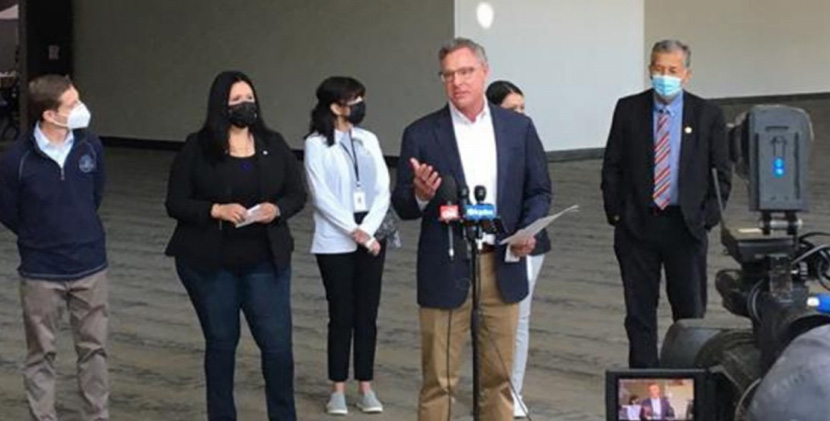 The Mortgage Bankers Association and nearly 100 industry trade and community organizations sent a letter to the House this week urging support for legislation that would promote housing development and construction near transit hubs.

H.R. 4307, the Build More Housing Near Transit Act of 2021, would maximize federal investment in fixed-guideway transit by ensuring the Federal Transit Administration takes a holistic and quantitative approach to evaluating the potential for affordable and market-rate housing development near transit alignments and station areas.

“In the 117th Congress, we believe the Build More Housing Near Transit Act can and should find a home in the infrastructure package that Congress will soon debate,” the letter said. “It is a smart, bipartisan, and low-cost solution needed to improve America’s infrastructure and Americans’ quality of life.”

The bill was introduced by Rep. Scott Peters, D-Calif. It has a number of co-sponsors, including Reps. Cathy McMorris Rodgers, R-Wash.; Alan Lowenthal, D-Calif.; Marilyn Strickland, D-Wash.; Ami Bera, D-Calif.; Lisa Blunt Rochester, D-Del.; Derek Kilmer, D-Wash.; Bobby Scott, D-Va.; and Thomas Suozzi, D-N.Y. Peters originally introduced the bill in the 116th Congress; though not enacted, the proposal was included as a provision in H.R. 2, or the Moving Forward Act, which passed the House last July.

By making some minor but essential enhancements to the evaluation criteria for the FTA’s Fixed Guideway Capital Investment Grants Program, or Section 5309 grants, the bill positively impacts availability of housing for all people in transit-served locations across the country. While real estate and economic development potential is currently part of the evaluation, each factor is considered individually rather than holistically. As a result, projects can receive funding when the potential for affordable and market-rate housing development is nearly impossible, while projects ripe for affordable housing development are denied funding.

For example, a city applying for transit dollars could have exorbitant impact fees or restrictive land-use policies that effectively prevent housing from being built in the vicinity of a transit stop. Yet, these policies alone would not disqualify a project applicant from receiving funding. As a result, the Section 5309 Grant Program’s adjacent goals of enabling “transit-supportive land use” and “economic development” often go unrealized.

If it becomes law, the Build More Housing Near Transit Act would require project applicants to submit a housing feasibility assessment which some transit authorities already conduct and would not otherwise be a significant added expense or requirement. An applicant that demonstrates the feasibility of and a commitment to building housing near transit would effectively earn bonus points during the evaluation process. In addition, the Build More Housing Near Transit Act would add “a commitment of local land-use policies to accommodate affordable and market-rate housing development associated with the project” to go along with a demonstrated financial commitment from the applicant.

“The United States is in the middle of a severe housing shortage and affordability crisis exacerbated by the economic toll of the COVID-19 pandemic,” the letter said. “This shortage of homes means families are paying more for rent. Americans are often living further away from jobs and critical services. Younger people are becoming homeowners at historically low rates, homelessness is on the rise and the country is not living up to its full economic potential.”

Additionally, the letter noted nearly half of the United States’ renter households are cost-burdened, spending more than 30 percent of their income on housing costs. As of March 2021, nearly one in six renter households were not current on rent, with renters of color disproportionately behind on payments.

“From encouraging more thoughtful planning, to supporting more inclusive housing policies, to enabling more efficient use of federal dollars, the Build More Housing Near Transit Act is a sound policy and the product of a collaborative process,” the letter said. “Its passage will enable housing that uses less land, takes cars off the road, and allow people to live closer to opportunity.”