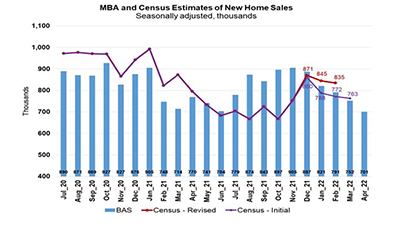 Mortgage applications for new home purchases in April fell by 14 percent from March and by 10.6 percent from a year ago, the Mortgage Bankers Association reported Thursday.

“The spike in mortgage rates cooled demand and homebuilders continued to grapple with rising costs, supply-chain issues and extended completion timelines,” said Joel Kan, MBA Associate Vice President of Economic and Industry Forecasting. “With the supply of existing homes on the market still at extremely low levels, the new home market is an important source of housing supply. However, the pace of construction has slowed in recent months.”

Kan noted as home prices increased, more than half of applications were for loan amounts greater than $400,000. “Higher rates and sales prices and larger loan sizes are eroding housing affordability and pricing some buyers out of the market,” he said.