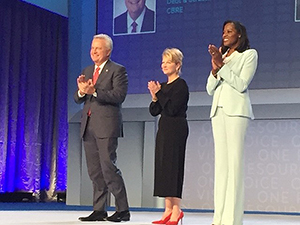 There’s been progress in recent years, but it’s still unusual to see women in leadership positions in mortgage banking. But change is happening, and happening fast, thanks to trailblazers like Susan Stewart, CEO of SWBC Mortgage Corp., San Antonio, Texas, who is also the Mortgage Bankers Association’s incoming chair for 2021.

Susan has worked in mortgage banking since age 24, and led SWBC as it grew from a small regional banker with three employees in 1989 to its present size, 680 employees, providing full-service origination-to-servicing in 43 states.

All the while, she’s made it a family affair. Husband Van is President of SWBC Mortgage. Daughter Tiffany Van Alstyne is its Performance & Risk Metrics Manager. Daughter Michelle Juarez is its Vice President of Mortgage Business Systems.

In fact, when Susan appears this month during the MBA Annual Convention & Expo on MBA LIVE, it will be very much “under one roof,” with Tiffany and Michelle introducing their mother and Van cheering them on.

Tradition with a Texas Flair

Susan grew up in Fort Worth, Texas, third of four daughters. Her dad was a banker; her mother a homemaker — at first, anyway. “When we were older, my mom went back to college and became a teacher, then a speech pathologist, and eventually a lawyer. So, yes, I had one of ‘Those Mothers,’” she said.

Her middle-class parents were “house-obsessed,” Susan said, and would drive around with the girls on weekends looking at houses. “We always owned our home but they never stopped thinking about their ‘dream home,’” she said.

Susan married just after high school and had her children while she was in college. Her marriage didn’t last. As a single mother, with daughters 2 and 5 years old, she needed a job. “And that’s how I got into the mortgage business,” she says.

She started at CitiMortgage in Ft. Worth as a processor in 1983. In less than a year she became an underwriter, followed quickly by a promotion to an operations manager.

“It turns out I had an affinity for mortgage banking — it was something I was good at,” Susan said. “I think that’s key to this entire business, we are helping people buy something that’s important and meaningful for their future.”

Susan met Van, then a dad of children ages 2 and 4, in spring 1986, while both worked for the same mortgage company in different offices. By that time, Susan’s kids were 5 and 8. The connection was immediate. They married in November 1986, and merged their children into one family — something both Susan and Van say is their greatest success, bar none.

In some ways, the timing couldn’t have been worse. Between crashes with the S&Ls and the oil industry, the Texas economy was reeling. “We went from 150 mortgage companies in San Antonio to about 30 really fast,” she says.

In 1989, she was recruited to head up SWBC Mortgage Corporation, a small start-up under the parent company of SWBC.

“For people like me, who are kind of bossy and opinionated and want to make the decisions and be responsible, this was the perfect incubator,” she says. “I would tell my bosses what I was going to do and they would just say, ‘Okay, great. Good luck.’”

It’s been a good partnership from the get-go, Susan says. “I’m the headstrong go-getter; he’s truly the wise counsel. Everything is better because he’s here. We are true partners, we are interchangeable. Working with your spouse, and building all this together, and especially with having our children here, it’s very special indeed.”

The company grew fast as Susan and Van found people “smarter and more talented in certain disciplines” than they were, she says. “We got twice as big and twice as good, and we ran it together as the only senior leadership for 20 years.”

Building a positive and open culture at SWBC was important to Susan. She’d watched the “hire and fire” practices, and had serious doubts on its effectiveness to build a company able to withstand business and market fluctuations.

Instead, she hired people who she felt were capable and nice and trained them as jacks-of-all-trades, so they could be moved around when business slowed in one area or another. “We have people who have been here 20, 25 years. One just retired this spring after 30 years,” Susan says.

Why do they stay? Quite simply, the culture—you can’t be a jerk and work at SWBC. “People who join the company always mention how nice everyone is, and I tell them ‘it’s a requirement,’” Susan said. “I can make someone better at their job, but I’ve never been able to make them nice.”

It’s a climate expectation that’s earned them the moniker “The Boy Scout Company.” But it’s a commitment to being nice that starts at the top and goes all the way down. Also, about being “rule” followers with a high standard of ethics and integrity.

“As we’ve gotten bigger, we’ve worked hard to stay true to our principles,” Susan says. “But we’re lucky to be an independent mortgage banker. That’s a characteristic we may share with many other independents. When you build a company together, you become a family and have pride in what you’ve accomplished.”

Speaking of which, the existence of independent non-depositories, which do half the mortgage business now, is something Susan feels deserves protection, especially as the GSEs emerge from conservatorship. That’s key to her goal of boosting minority homeownership rates.

“MBA asked me to pick two or three issues, but for me there’s really only one — that’s turning around the abysmal minority homeownership rate,” she says. “It’s the worst it’s been in 50 years. We’ve gone backwards. It’s shameful.”

She points out the cultural disparity of her own growing up “house-crazy” versus never having a homeowner in a family or understanding the role of homeownership in accumulating generational wealth.

“Many people in our communities, particularly people of color, just don’t see homeownership in their future, and I’d like to start to change that as MBA Chair,” Susan says. “It’s not about the money, it’s about doing the right thing; we should be thinking about our legacy, that we did something to solve this problem for our country and its people.”

That’s where having one voice can make the difference. “MBA is the right place for us to draw a line in the sand and say ‘all this bad stuff is going on, it’s not the America any of us thought it would be or want it to be,’ so what can we personally do?” Susan said. “Those of us in the mortgage industry can become personally involved in opening doors to homeownership to people who are ready. We just have to say we’ll do it.”

Mortgage bankers are in a unique position to make the world a little better, she adds. “I think we need to get out there, be a little more proactive, more engaged, help educate future homeowners, and come up with loan products that are safe for the borrower and safe for the lender. And then do the right thing. We won’t fix it overnight. But it’s also wrong to say it’s too hard, we’re not going to try. We have a pretty big voice when we all work together.”

Stewart has been active in MBA for decades. She currently serves on the MBA Board of Directors; is past Vice Chair of the MBA Residential Board of Governors (RESBOG) and served as president of the Texas Mortgage Bankers Association. She is active with the MBA Opens Doors Foundation, where both she and SWBC have been recognized as Guardian-Level donors.

And, like all of us, she’s learned to navigate the “new normal” of the pandemic and even sees a silver lining. “The pandemic exposed the incredible lack of a safety net for many individuals and families,” she said. “The number of mortgages in legitimate forbearance demonstrates that many homeowners were only a few paychecks away from disaster. Perhaps this is an opportunity for the industry to further promote financial literacy and planning, as well as other borrower education for homeowners. It’s clear borrowers have gotten the message that refinancing can provide significant savings when rates remain low or drop. So let’s consider turning our ability to market to homebuyers to less transactional activities, such as helping educate consumers on how to better plan, budget and save.”

In thinking about how she’d like to be remembered, Susan comes up with three words: integrity, honesty, kindness. Those are the things she thinks about, and never loses sight of, that she thinks trump everything else. It’s the foundation of SWBC’s culture and something she shares with women inside and outside of her own company who are coming up in the business.

“There’s always a group of young women here—there are three down the hall right now—I work with them to help them move ahead,” she says. “I’m a big believer in women, I’ve always wanted to be a role model for my daughters, and I’ve tried to become adept at mentoring women in this industry.”

“If you grew up in the business, like Marcia and I did, there were a lot of women working but all the positions of power were men,” Susan said. “In forming mPower, Marcia really displayed to us that there was a longing and a desire to have an environment where women can just say things and not worry about how they’re going to be perceived, and have a support system that’s maybe outside of where they work. The energy in the room at mPower events is unbelievable.”

“That’s why I wanted to be chairman, even though I have a lot on my plate,” she says. “I wanted to show my daughters that even when you’re in the place in your career where you can keep doing what you’re doing, you have to step out and do things that are hard. You can’t just ever just sit back. For me as a woman, it’s important to do this.”

She’s also excited that the Chair-elect for 2020 is Kristy Fercho, executive vice president and head of Wells Fargo Home Lending. “At the end of the day, it was all about being an example to my daughters, but also continuing to be an example to my peers, including Kristy, who will be the first African-American woman chair next year. That’s a great thing!”

Getting through this year will be challenging—rolling out her initiatives; setting expectations for the future; and running SWBC, but she wouldn’t have it any other way.

“I feel I have an obligation to give back to this industry which has been so good to me and my family,” she said. “This is our legacy. We have the ability to do important things this year, for ourselves and those who will follow in our footsteps, and we need to do them together.”