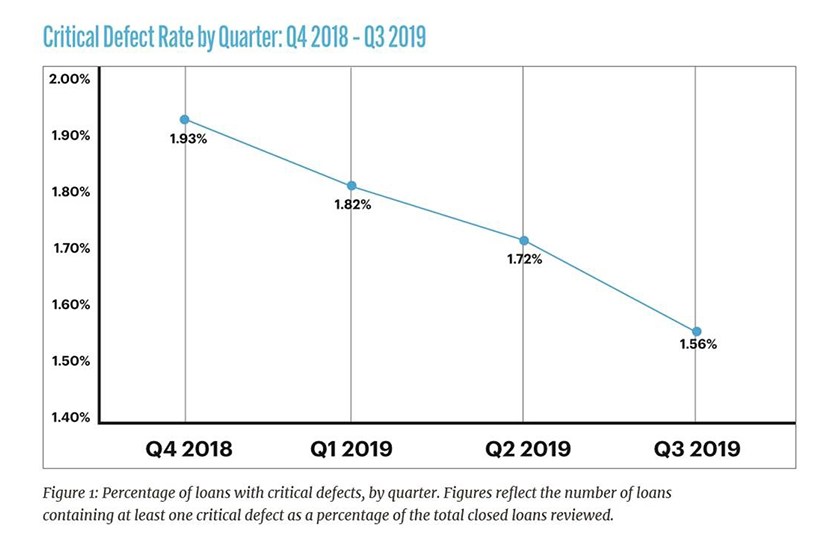 The company’s quarterly Mortgage QC Trends Report said the decrease represents a 19% improvement from the most recent critical defect rate peak, which occurred in Q4 2018.

“The driving force behind Q3’s strong critical defect rate is the increase in refinances, which accounted for 40% of the overall volume of loans reviewed this quarter,” said ARMCO Executive Vice President Nick Volpe. “Given the current rate environment and overall mortgage market conditions, ARMCO’s outlook for both the critical defect rate and the market as a whole remains incredibly strong.” said ARMCO Executive Vice President, Nick Volpe.

–The percentage of government loans reviewed in Q3 fell as the interest rate environment drove more conventional refinances, resulting in a 10% improvement on FHA loan defects compared to the previous quarter.

–Increase in Property/Appraisal defects continue to be driven by lasting effects of Hurricane Dorian, Hurricane Humberto and the multiple wildfires in Northern and Southern California.

–The share of refinances in Q3 2019 were significantly higher than prior quarters, having a positive effect on critical defect rates.

The report noted changes in interest rates and volumes are almost immediately visible when comparing the past 4 quarters (Q4 2018 to Q3 2019). In Q3 2019, when the share of refinances and conventional loans increased, critical defect rates almost inevitably fell.

“Looking at the overall state of the market, borrowers are happy with the interest rate environment and property appreciation, and lenders appear happy with volumes and profitability,” the report said. “Rental property availability remains constrained, driving further parity between renting and owning. The results are a mortgage market that is healthy and expanding.”

The report said Income/Employment defects led defects at 20.53%., up slightly from the second quarter but well below the first quarter (27.78%). “This slight increase is considered is a normal fluctuation,” ARMCO said.

Of the 10 categories that had measurable critical defects rates, five experienced increases while the remaining five decreased from the previous quarter. Categories relating to core underwriting and qualification saw improvements compared to the previous quarter, although remain the leading defect categories in Q3 2019. Assets, which were elevated in the prior quarter, moderated a bit in the current quarter (17.80% in Q2 down to 13.25% in Q3) but still remain higher than the 11.11% in Q1 2019.

ARMCO said the only possible area of concern is the increase in property-related defects, which more than doubled in Q3 and stand at 7.95%, a more than 100% increase from prior quarters. Property Eligibility defects also rose, albeit at a much slower pace. ARMCO attributed the increases to “a particularly bad quarter for natural disasters,” as it encompasses the timeline for the two largest hurricanes to make landfall (Humberto and Dorian), as well as the multiple large wildfires in northern and southern California.

“Because of the strong property market (lack of inventory, rental demand), we remain cautiously optimistic that these types of defects remain something to monitor but not panic over,” the report said. “It is safe to say that the industry, by and large, is originating quality loans,” the report said. “The latter half of 2019 and the early part of 2020 represent positive times in our industry, and at risk of jinxing it, we are going to keep the conclusion short and let the numbers speak for themselves. Or as we hear salespeople say from time to time, ‘Don’t keep selling past the Yes.’”