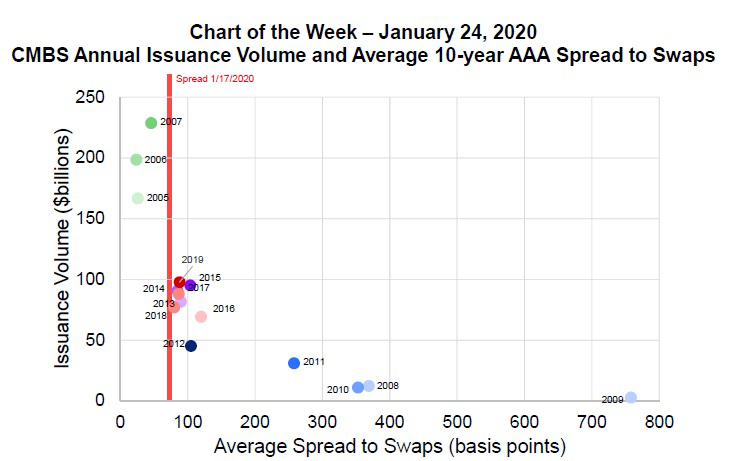 After a slow start in 2019, the commercial mortgage-backed securities market ended strong, with $39.1 billion of private-label CMBS issuance during the fourth quarter – more than double the $18.8 billion issued during fourth quarter 2018. Overall, CMBS issuance in 2019 came in at $97.8 billion, 27 percent higher than 2018 and the strongest year since 2007.

It is no coincidence that CMBS spreads “came in” during 2019. Last January, new-issue, CMBS 10-year Senior AAA bonds were trading 102 basis points higher than comparable swap rates. With some ups-and-downs, they finished the year at just 82 bps above swaps. A-rated CMBS started 2019 at 230 bps over swaps and finished at 182 bps. The falling spreads can be considered a tangible measure of investors’ growing demand for CMBS.

As we start 2020, the CMBS market is poised to continue to grow. There is a healthy relationship between CMBS spreads and issuance, as seen in the chart above. In the “boom years” of 2005, 2006 and 2007, AAA spreads to swaps averaged, respectively, 26 bps, 24 bps and (including the second half of the year during which spreads rose) 46 bps. In each of those years, issuance topped $150 billion.

From 2008 to 2011, during the Global Financial Crisis, spreads topped 200 bps each year and annual issuance never topped $31 billion. In more recent years, spreads have averaged 80 – 90 bps, with annual issuance of between $77 billion and $100 billion.

As of January 17, CMBS AAA spreads were averaging 75 bps — a good sign for investor demand, and for potential CMBS issuance this year.

(Jamie Woodwell is vice president of commercial/multifamily research and economics with the Mortgage Bankers Association. He can be reached at jwoodwell@mba.org.)