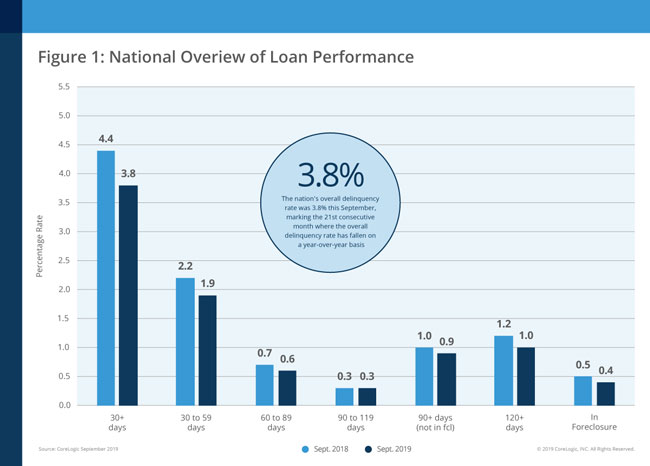 CoreLogic, Irvine, Calif., reported 3.7% of mortgages were in some stage of delinquency in October, an 0.4 percentage point decline from a year ago.

The company’s monthly Loan Performance Insights Report also said the foreclosure inventory rate fell to 0.4%, down 0.1 percentage points from a year ago, tying the prior 11 months as the lowest for any month since at least January 1999.

The report said the share of mortgages that transitioned from current to 30 days past due was unchanged at 0.7% in October. By comparison, in January 2007, just before the start of the financial crisis, the current-to-30-day transition rate was 1.2%, while it peaked at 2% in November 2008.

“National foreclosure and serious delinquency rates have remained fixed at record lows for at least the last six months,” said Frank Martell, president and CEO of CoreLogic. “However, as markets can be much more volatile at the metro level, both late-stage delinquencies and foreclosures have continued to increase at this level in the Midwest and Southern regions of the country.”