MBA Chart of the Week: Homeownership Rate by Age 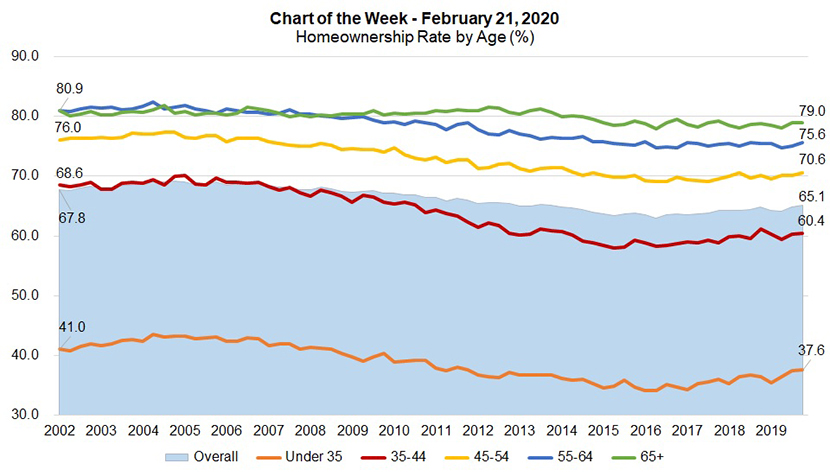 The national homeownership rate increased to 65.1% in the final three months of 2019, the first time above 65 percent in seven years. Since bottoming out at 62.9 percent in second quarter 2016, the number of owner-occupied homes has increased by 4.5 million.

Households headed by a person 65 years old or greater (green line) had the highest proportion of homeowners last year’s fourth quarter (by age group) at 79%. If we drill down within the 65+ age group, the homeownership rate initially increases and peaks for households headed by someone 70-74 years old (80.5% in 2019 Q4) and falls thereafter (to 78.2% for the 75+ group in 2019 Q4). However, this decrease is smaller than it was for earlier cohorts and, as pointed out by in a recent Freddie Mac Insight article, Current Generations of Older Households are Holding onto their Homes for Longer than Previous Generations.

While overall homeownership rates in 2019 were similar to (or slightly above) the rates in the mid-1990s (before the decade-long buildup), homeownership rates for younger households are 5% below where they were 25 years ago (53% versus 48% for ages 30-34, and 62% versus 57% for 35-39). The opening gap for households headed by someone ages 35-44 is clearly shown on the chart.

Between 2002 and early 2007, the red line lies very close to the overall homeownership rate, which is represented by the shaded area in the chart. However, the two rates subsequently start to diverge, and the gap between them reached 5.6% in third quarter 2016. The gap then shrunk to 3.7% in in the fourth quarter of 2018 but has since increased by a full point–back now to 4.7%.