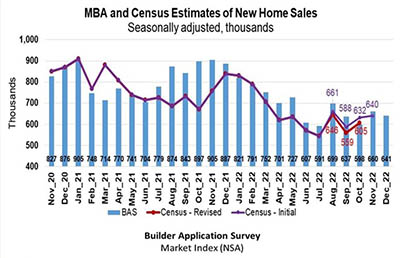 Mortgage applications for new home purchases in December fell by 5 percent from November and by 25.2 percent from a year ago, the Mortgage Bankers Association reported Thursday.

“December new home purchase activity – both for applications and estimated sales – ran more than 20 percent behind last year’s pace,” said Joel Kan, MBA Vice President and Deputy Chief Economist. “The decline in activity was in line with single-family housing starts that were 32 percent lower than a year ago. Higher mortgage rates and a weakening economy held back buyers at the end of last year.”

“The housing market is still in need of more starter and entry-level homes, especially when current demographic trends point to the potential for more younger households to enter homeownership in the near future,” Kan said. “New construction of these units will help buyers entering the housing market.”

The new home sales estimate is derived using mortgage application information from the BAS, as well as assumptions regarding market coverage and other factors. Changes do not include adjustments for typical seasonal patterns.