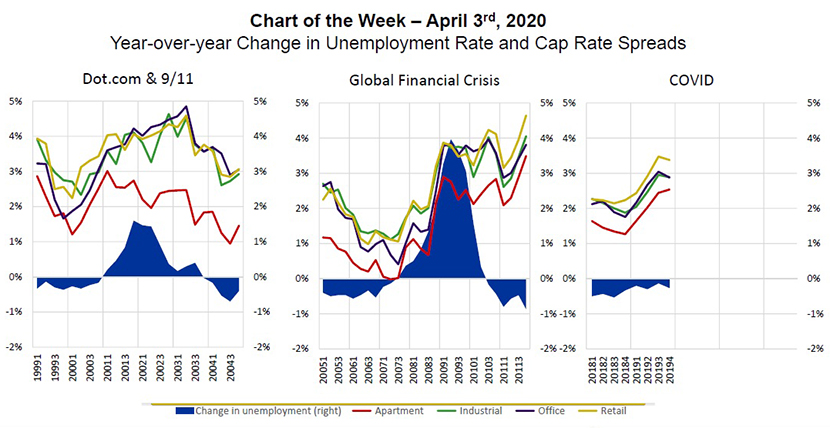 For commercial real estate markets, a key factor in how we work through this period of uncertainty will be how investors value properties and their incomes. Our experiences in the past two recessions may provide some insights.

The chart above looks at unemployment rates and capitalization rate spreads, or the difference between cap rates and the 10-year Treasury. The spread is one indication of the premium an investor requires to invest their money in commercial property rather than in a risk-free government bond.

In 1999, prior to the dot.com bust and 9/11, optimism about the commercial property market and a general bullishness about the economy pushed cap rate spreads low. Those spreads started to rise in 2000, such that when the unemployment rate began to climb one year later, spreads were already between 300 and 400 basis points. As the recession waned, the unemployment rate started to decline and within one quarter, cap rate spreads were already back at or below those levels.

In 2007, prior to the Global Financial Crisis, competition among CRE investors and a thirst for yield pushed cap rate spreads to post-1995 lows. Apartment cap rates roughly matched 10-year Treasury yields. As unemployment began to climb, so did spreads, which spent most of the downturn between 300 and 400 basis points for most property types. They remained elevated even after the unemployment rate began to decline.

Fast-forward to today, cap rate spreads are entering the current downturn close to the levels they rose to in each the previous two downturns. And that is before factoring in the 100 basis-point drop in Treasury yields during this year’s first quarter. By this measure, cap rate spreads are already roughly where they rose to during the depths of both of the previous recessions. Coupled with a hope/expectation that this downturn may be sharp but short, it is possible that CRE cap rates may be relatively unaffected by the current crisis.

(Jamie Woodwell is vice president of commercial/multifamily research and economics with the Mortgage Bankers Association. He can be reached at jwoodwell@mba.org.)