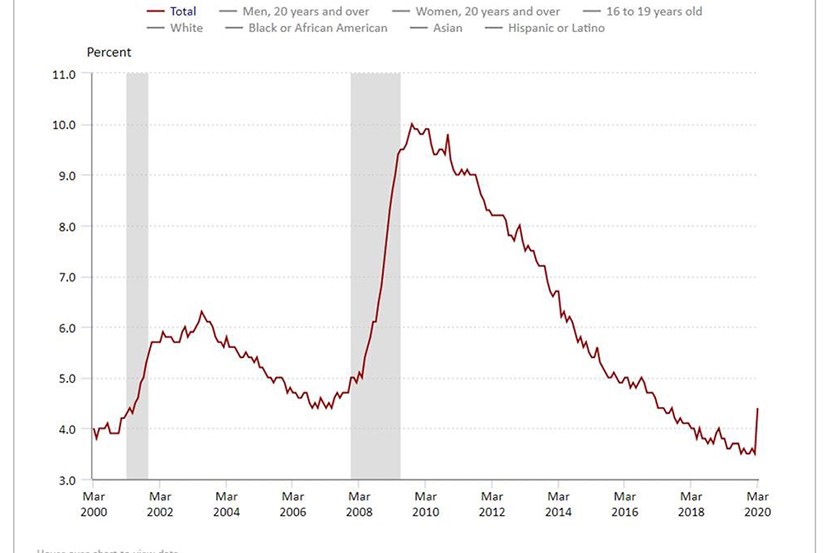 Was it just last month that the nation’s unemployment rate matched a 50-year low?

Yes, it was. But that was a lifetime ago in the Age of the Coronavirus.

And as we know, this is just the tip of the iceberg. The Labor Department said nearly 10 million Americans filed initial unemployment insurance claims over the past two weeks—and that’s just those who were able to complete the process.

“Job losses spiked in March, led by almost half a million fewer jobs in restaurants and hospitality, clearly one of the hardest hit sectors in the economy thus far,” said Mike Fratantoni, Chief Economist with the Mortgage Bankers Association. “The jump in the unemployment rate by almost a full percentage point exceeded expectations, but only points to the level of distress among many households. The report almost showed almost an additional 1.5 million households now working part-time when they would rather have full-time hours. The decline in the participation rate already indicates that some workers are stepping back from even looking for a job as the pandemic crisis continues.”

Fratantoni noted many respondents in the household survey indicated that they are on temporary furlough. “This does provide additional support for our forecast of a “V-shaped” path for the economy, the job market and the housing market,” he said. “We do expect those unemployed  to be called back to their jobs when the crisis abates.”

And although construction employment declined last month, there was a small increase in residential construction, with the decline driven by non-residential builders. “When housing demand recovers later this year, we will once again be facing a supply shortage, so it is good to see that homebuilders are continuing to hire.”

But Fratantoni cautioned these number were only partial. “As bad as this month’s employment numbers were, given the rapid jumps in claims, we fully expect that next month will show even larger job losses,” he said. “This weakness will result in a drop in demand for purchase mortgages, but we do expect continued strong demand for refinance loans over the next several months, given the record low level of mortgage rates.”

Mark Vitner, Senior Economist with Wells Fargo Securities, Charlotte, said the abrupt decline in nonfarm payrolls reinforces one of the defining characteristics of this recession—the sudden stop to economic activity as efforts to contain the spread of COVID-19 intensified.

“Another takeaway is manufacturing and construction—the most cyclical parts of the economy—are not likely to be the center of this economic storm,” Vitner said. “Instead, the most severe job losses are likely to be in leisure & hospitality, retailing, health & social services and professional & business services. Each of the industries employs more workers than manufacturing or construction, which is one reason why the aggregate job losses over the next few months are likely to be so large.”

Mark Fleming, Chief Economist with First American Financial Corp., Santa Ana, Calif., agreed. “This is the Great Recession for the services industry–131 million workers in the overall service sector are 86 percent of total non-farm employment,” he said. “Retail and restaurants are 10.3 percent and 8.1 percent of total non-farm employment respectively. A shock to the services sector this large is like nothing we’ve ever seen before.”

Fleming noted last week’s jobless claims of 6.6 million added to last week’s 3.3 million claims, 6 percent of the labor force has claimed unemployment benefits. “This report doesn’t cover the most recent weeks and understates the current reality.  This recession is unique in the speed of its development and that it is driven by the service sector, instead of business investment,” he said.