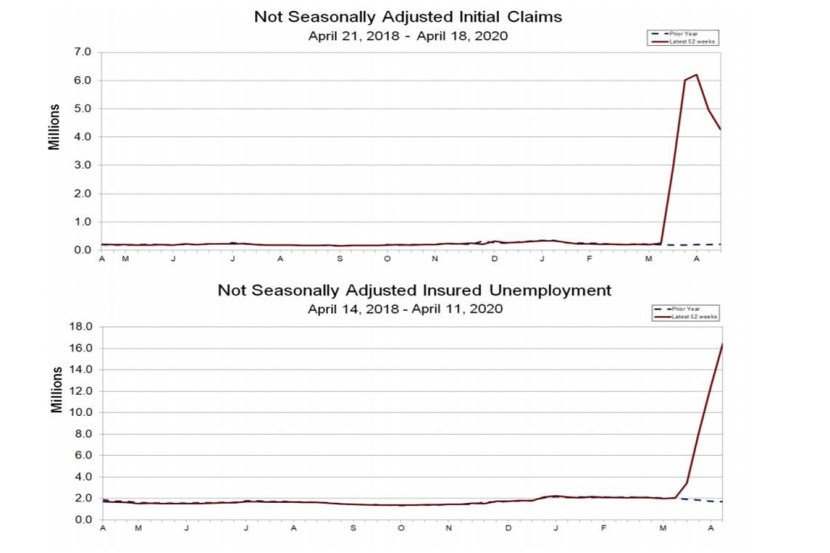 The Census Bureau reported between April 12 and 18, 4.427 million Americans applied for jobless benefits for the first time. While this represented a decrease of 810,000 from the previous week, it continued a bruising spring in which historic highs for homeless claims have been shattered by the economic impact of COVID-19.

The four-week moving average rose to 5.786 million, an increase of 280,000 from the previous week’s revised average. The 26.5 million initial filings represents 16 percent of the share of the workforce at its pre-crisis peak in January.

“The transition of industries reporting layoffs mirrors the wreckage in the real economy, from those with extensive face-to-face interaction like leisure & hospitality and retail to a broader array of industries, as the extent of the hit to aggregate demand comes into focus,” said Tim Quinlan, Senior Economist with Wells Fargo Securities, Charlotte, N.C. “Grocery stores are not the only ones struggling to keep up with a sudden surge in demand. Capacity constraints and backlogs remain a factor at state unemployment offices, which suggests the true number of layoffs is still higher than what the claims data suggest. New jobless claims should continue to fall, but will likely stay in the millions for several more weeks.”

Quinlan noted one positive in the data—despite the still staggeringly high jobless claims, this is the third straight weekly decline. “Though that is cold comfort to the millions of people who now find themselves out of a job,” he said. “For those who are legitimately out of work, there is some consolation in that the CARES Act significantly augmented the unemployment insurance they can expect to receive. These recipients can count on receiving money from their states plus the additional $600 per week from the federal government.”