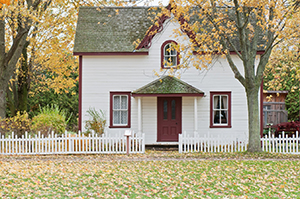 NAR said total existing home fell from August to a seasonally adjusted annual rate of 5.38 million in September. Despite the decline, overall sales improved by 3.9% from a year ago (5.18 million).

“Existing-home sales declined in September, but are running more than 7 percent ahead of last year’s sales pace, led by an almost 10 percent gain in the South, said Mike Fratantoni, Chief Economist with the Mortgage Bankers Association. “Home sales still remain constrained by a lack of inventory, with only 4.1 months of supply at the end of last month.”

Fratantoni said the combination of a strong job market and low mortgage rates continue to support housing demand as 2019 comes to a close. “Buyer interest is particularly robust among first-time homebuyers, who made up a third of sales last month,” he said. “Millennials’ interest in homeownership is strong, and should continue to support home sales growth heading into next year, given the low rate environment and still favorable economic conditions.”

“Despite the monthly drop, lower mortgage rates are providing a lift to the housing market, and resales are up 3.9% over the year,” Vitner said. “While buying conditions have improved, the continued lack of inventory on the market is likely limiting sales.”

NAR Chief Economist Lawrence Yun said despite historically low mortgage rates, sales have not commensurately increased, in part due to a low level of new housing options. “We must continue to beat the drum for more inventory,” Yunsaid. “Home prices are rising too rapidly because of the housing shortage, and this lack of inventory is preventing home sales growth potential.”

NAR reported the median existing home price for all housing types in September rose to $272,100, up 5.9% from a year ago ($256,900), marking 91 straight months of year-over-year gains. Total housing inventory at the end of September sat at 1.83 million, equal to August, but a 2.7% decrease from 1.88 million one year ago. Unsold inventory is at a 4.1-month supply at the current sales pace, up from 4.0 months in August and down from the 4.4-month figure recorded a year ago.

Distressed represented 2% of sales in September, unchanged from August but down from 3% a year ago.