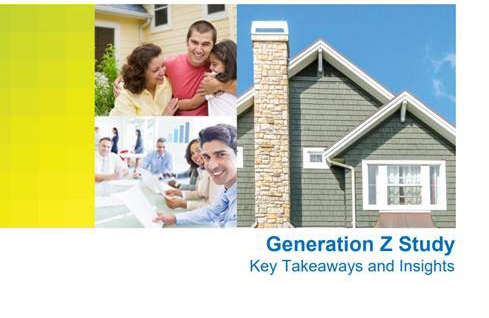 Stop wondering about Millennial homeownership–it’s already time to think about the generation beyond that.

The dream of homeownership is alive and well within “Generation Z,” the demographic cohort following Millennials, according to a new survey from Freddie Mac, McLean, Va.

The survey of respondents (ages 14-23) found Gen Z views homeownership as having a more positive perception of what it means to own a home than Millennials at the same age. They estimate that they will attain this goal by the time they turn 30 years old, three years younger than the current median homebuying age (33).

Freddie Mac DEO David Brickman said data from this and other research show that Gen Z believes owning a home provides more privacy, control and independence than renting. In addition, Gen Z feels that owning a home is a sign of success, is something to be proud of and provides stability and/or financial security. The survey data also show that, like Millennials, Gen Z acknowledges the benefits of renting, but Gen Z is less likely to see renting as more appealing than buying a home.

“While members of Gen Z clearly aspire to homeownership, they are realistic about potential barriers and understand the potential benefits of renting,” Brickman said. “Although these results are good news for the housing markets, they also highlight the challenges many in Gen Z will face as they enter the market to rent or buy.”

–Gen Z has strong, positive views of homeownership, and the overwhelming majority (86%) want to own a home someday. Gen Z does, however, see the following as obstacles to homeownership: home prices (92%), saving for a down payment (82%) and an unstable job or job change (68%). For those who plan to pay for college, student debt is considered a major obstacle (54%).

–The Gen Z median self-estimated age at the time of first home purchase is 30 years old, compared to the current median age of 33 for first-time homebuyers. In addition, the majority of Gen Z see homeownership as something to be proud of (93%), a sign of success (86%), something that provides privacy (93%), and providing independence and control (88%).

–Gen Z respondents report that they have received a financial education at home and are at least somewhat confident in their future well-being. Moreover, 33% expect to pursue a bachelor’s degree, and 30% expect to pursue a master’s degree or higher, a significant increase from Millennials, who are currently at 27% and 12%, respectively.

–In terms of financial awareness, 65% of Gen Z respondents report that they are not confident in their knowledge of the mortgage process. To learn more, 71% of Gen Z would consult with a parent, 58% with a real estate agent, 54% with the Internet, 45% with other family and/or friends, and 41% with a bank or mortgage lender.

–Compared with Millennials at the same age (18-23), Gen Z has a less positive view of renting overall. However, Gen Z acknowledges the positive aspects of renting, such as having flexibility over where to live (68%), lower stress than owning a home (63%) and affordable proximity to a medium or large city and the ‘action’ associated with urban living (62%).

“It’s clear that many in Gen Z reflect the times in which they have lived,” Brickman said. “They were generally young children during the economic crisis of 2008 but have grown up during a remarkable period of sustained economic growth and prosperity. In general, they are more financially educated and aware than previous generations, and they appear to have a clear understanding of the benefits offered by our nation’s housing market–and some of its challenges.”