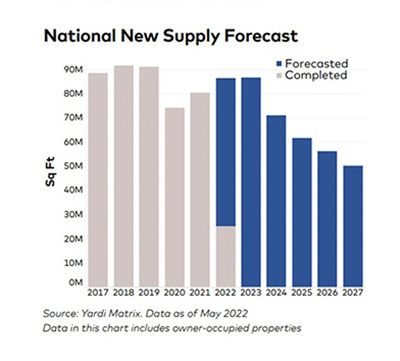 “While vaccines and treatments have moved the disease from pandemic to endemic, many workers and firms have become accustomed to remote and hybrid work setups,” CommercialEdge said in its June National Office Report.

A recent report from Pew Research, Washington, D.C., found 60 percent of office workers with jobs that can be done from home say they would prefer to work from home most or all of the time. Office occupancy rates have plateaued at 43 to 44 percent for nearly two months, suggesting that level could become the new normal, said office security company Kastle Systems, Falls Church, Va.

“The ongoing nature of the disease as well as employee pushback against some corporate announcements has led to a year of stop-and-start return-to-office plans,” CommercialEdge noted. “Tech giants like Google, Amazon and Apple have announced and altered return-to-office policies multiple times over the past year but seem set to adopt permanent hybrid work strategies. Many other companies, aware of a historically tight labor market, are taking a similar tack and resisting issuing forceful demands when trying to bring workers back.”

The inflation rate and increasing as prices could make it harder for employers to get employees back to the office, the report said. “Inflation is at levels not seen in 40 years and the national average price of a gallon of gas recently hit $5 for the first time ever,” CommercialEdge said. “Not only will getting to the office be more expensive than ever for workers but so will ancillary expenses such as coffee and lunch. Employees that are required to return to the office will need to feel like the time and money spent on a trip is worthwhile.”

Inflation could also affect the transaction market, CommercialEdge said. Office deals could increase as investors look to lock in today’s interest rates due to strong indications that the Federal Reserve will raise rates multiple times in the next year. “However, inflation and anticipated rate hikes represent another headwind in a market full of uncertainty, which could depress investor enthusiasm,” the report said.