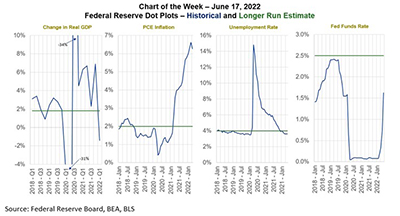 The Federal Reserve is racing to catch up to economic events, announcing a 75-basis-point increase in the federal funds rate and signaling more increases following last week’s FOMC meeting. The FOMC’s median projection for the federal funds rate now shows a year-end 2022 rate of around 3.4%, compared to the 1.9% projection from the March meeting. For 2023, the median projected rate was moved to 3.8% from 2.8% in March. A federal funds target rate at almost 4% by the end of 2023 should be effective in slowing the economy and ultimately bringing down inflation.

Impacts from this tighter monetary path have already been observed across the economy. For example, financial conditions have tightened, and since the year began, the 10-year Treasury yield has increased almost 190 basis points, the Dow Jones Index declined 17%, and the S&P 500 dropped 21%. While the Fed is not trying to cause economic harm, its dual mandate calls for it to maintain price stability at a time when inflation, as measured in May by the U.S. Bureau of Labor Statistics’ Consumer Price Index (CPI), is growing at its fastest pace since the 1980s. Prices for food, shelter, and fuel – key spending categories for most households – saw significant increases, which likely added more urgency to the Fed’s decision making. The Committee’s forecast for Personal Consumption Expenditure (PCE) inflation was raised to show growth of 5.2% for 2022 compared to 4.3% in their previous forecast.

The ongoing reduction in the size of the Fed’s $9 trillion balance sheet, including its holdings of mortgage-backed securities, is another factor putting upward pressure on mortgage rates. The 30-year fixed mortgage rate started 2022 at 3.5% and has reached over 5.6%, based on MBA’s Weekly Applications Survey.  Many lenders are quoting rates above 6% this week, as mortgage to Treasury spreads have widened due to significant uncertainty over how markets will fill the void the Fed is leaving as it unwinds the balance sheet.

The residential housing market has slowed considerably over the past month as rate increases have taken hold. We expect that this slower pace will remain through the summer, but buyers could return later this year if improved market understanding of the Fed’s plans leads to less rate volatility. For commercial and multifamily markets, there is little doubt that in addition to raising borrowing costs significantly, especially for shorter-term and adjustable-rate loans, the rising yield environment will pressure cap rates and put even more emphasis on property fundamentals.