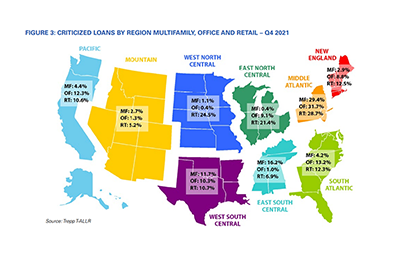 Trepp, New York, reported bank commercial real estate originations rebounded in late 2021 while delinquencies continued to trend down after a moderate rise in 2020.

Trepp based its analysis on its Anonymized Loan-Level Repository data set, which includes bank balance sheet loan data on more than $160 billion in loans sourced from multiple banks.

On Monday the Mortgage Bankers Association released its latest Commercial Real Estate Finance Forecast, which said total commercial and multifamily mortgage borrowing and lending will likely hold steady at a projected $895 billion of total lending in 2022, roughly in line with 2021 totals ($891 billion).

Anderson noted “mixed signals” for the office sector. “Originations are up, but delinquency rates have edged higher and banks in large urban areas have not yet ratcheted down risk ratings on office loans,” he said. “Similarly, origination volume has picked up, even in the hardest-hit retail and lodging sectors, but delinquencies have not yet recovered.”

Anderson said the office sector delinquency rate for bank loans has increased for the past several quarters, “representing a delayed reaction to low office occupancy rates during the pandemic.”

Trepp said criticized loan rates–those with a standardized risk rating of 6 or higher–showed significant variation across geographies and property types. “Lenders in the Mid-Atlantic have elevated concerns about risk across all three of the largest loan types,” the report said. “Lenders in several areas from the West South-Central area through the East South-Central and up to the Mid-Atlantic area were keeping a closer eye on multifamily. Many areas have recovered from the economic disruption of the pandemic, but lenders are still maintaining a higher level of vigilance.”

The Mountain and East South-Central regions have the lowest proportion of criticized loans, the report said.