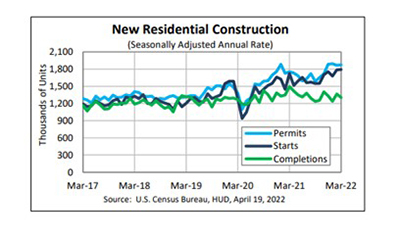 Housing starts improved slightly in March, thanks to a bump in multifamily starts, HUD and the Census Bureau reported Tuesday.

“Starts for the prior two months were also revised modestly higher, which puts home building on firmer footing ahead of the recent spike in mortgage rates,” said Mark Vitner, Senior Economist with Wells Fargo Economics, Charlotte, N.C. “Building permits also rose solidly during the month and the prior month’s total was revised slightly higher. While the revisions lifted both single-family and multifamily starts, much of the upward adjustment was in multifamily units, with starts and permits for apartment projects increasing.”

“Expectations had called for a slight drop,” Vitner said. “Not only did housing starts top expectations, but data for the prior two months also were revised higher…the strength in housing starts at the start of 2022 likely reflects some easing in supply constraints that have plagued home builders during the pandemic. While shortages still exist, many builders have found workarounds and many firms have stockpiled key materials. Labor is also more plentiful, as evidenced by the recent strength in construction employment.

However, Vitner suggested while home building has gotten off to a strong start, single-family starts have likely peaked for the year. “With completions picking up, the backlog of single-family homes that have been authorized but have not yet been started appears to be leveling off,” he said. “This is likely a precursor to a modest pullback in single-family starts we expect to take hold over the balance of this year. Even with a pullback, however, the strong start to the year puts single-family starts on pace to easily top last year’s level.”

“Builders continue to face supply chain disruptions that have pushed prices for building materials higher, as well as a shortage of skilled labor, materials and lots that make it difficult to increase the pace of construction,” said Odeta Kushi, Deputy Chief Economist with First American Financial Corp., Santa Ana, Calif. “In addition to supply chain disruptions, builders are growing concerned about declining affordability. In February 2022, the average 30-year, fixed mortgage rate stood at 3.8% and now it’s above 5%. The increase in rates since February has reduced consumer house-buying power by $60,000.”

Doug Duncan, Chief Economist with Fannie Mae, Washington, D.C., noted with mortgage rates now having risen nearly 200 basis points since mid-December, it is only a matter of time before this weighs significantly on housing demand due to worsening affordability. “However, in the near term, due to continued heightened order backlogs, strong gross margins realized by homebuilders, and a lack of existing homes for sale, we expect new home construction to remain resilient,” he said. “We are only expecting a modest decline at this point in housing starts over the second quarter. However, the higher mortgage rates continue to rise, the more this will likely weigh on home construction later this year.”