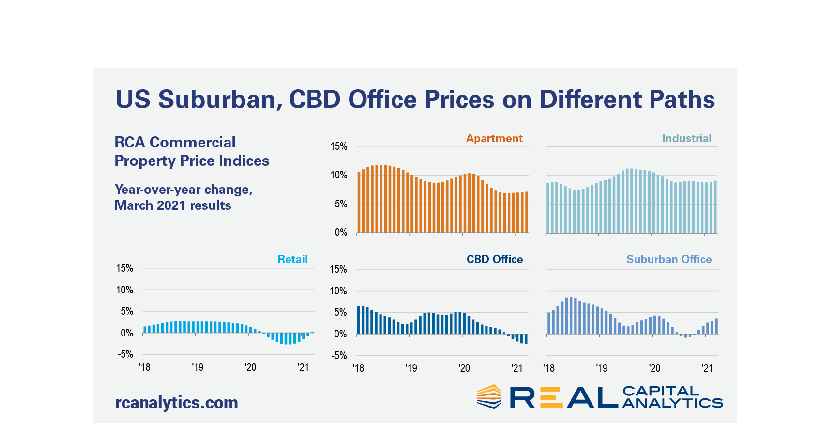 “The retail, multifamily and industrial indexes, which have all been positive since the end of the second quarter of 2020 or earlier, all posted strong gains over the three-month period,” Costar, Washington, D.C., said in its Commercial Repeat Sale Indices report. Meanwhile, the office index declined by 0.7 percent and hotel property priced fell a sharp 4.9 percent in that period.

Divergences were stark across regions as well, CoStar said. The Midwest and South indices both posted 1 percent or larger gains over the first quarter of 2021, while the West declined somewhat and the Northeast declined sharply.

Avery said RCA’s industrial index climbed 9.1 percent year-over-year in March, the fastest gain among the property sectors, while apartment prices were not far behind at 7.1 percent. The research firm’s U.S. National All-Property Index grew 7.8 percent from a year prior. CoStar reported repeat-sale transaction volume equaled $25.4 billion in the first quarter, a 20 percent decrease from the same period in 2020.

“Investor activity remains below levels seen entering the pandemic, although it has recovered strongly from the lowest levels of activity seen in the second quarter of 2020,” the report said. The distressed sale percentage of total transaction volume remained at 1.9 percent, “which is extremely low by historical standards,” CoStar said.